Greater Western Sydney's push for the finals continues to unravel with Aidan Corr leaving the Giants' hub in Queensland two days after informing the club he would depart at the end of the season.

One of the Giants' longest serving players, Corr's eight years in the orange ended in controversy with the defender flying home to Sydney on Tuesday, effectively ruling him out for the rest of the season. 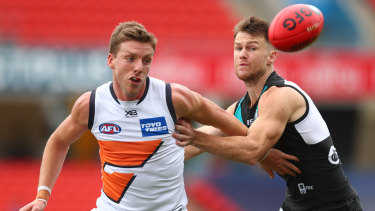 Aidan Corr has left the Giants’ hub after informing the club he would exercise his rights as a restricted free agent.Credit:Getty Images

The Giants made the decision for Corr, who grew up in Melbourne, to leave after he told them on Monday he would be exercising his right as a restricted free agent. He has been strongly linked to North Melbourne.

The timing of the announcement has blindsided players and coaches at the Giants, who are fighting for a place in the eight heading into the final round of the home and away season.

Coach Leon Cameron said the Giants had not pushed Corr, one of eight players out of contract at the end of the season, to make an early announcement on his future.

Corr hurt his ankle against Adelaide and was out for three to four weeks, Cameron said. The longer end of that time frame would have him available for the preliminary finals, if the Giants were to get that far.

"The players were disappointed. But equally Aidan Corr has been a very, very good servant of our footy club. He's a fine young man, he clearly wants to start up family from where he's from back home in Melbourne. He's got his reasons.

"I thought our players handled that really, really well. They were a bit shocked like myself and the other coaches. We've been working feverishly throughout the year to secure up his services. It hasn't gone our way. We've been very open and honest about it, like I'm letting you guys know now.

"That's what happens with free agency. It probably would have been a lot different if Aidan was still playing because he's totally invested.

"He probably can't see that he was going to get back because of the significant ankle injury and so the best thing was to move on, head back to Sydney and we sort it out after the season finishes.

"We probably thought it was best he head back home to Sydney while we're continuing our journey here."