South Sydney thumped the Gold Coast 36-6 on Saturday afternoon to notch their 10th straight victory, the first time since 1989, the year they won the minor premiership, the club has strung together such a run.

The chance to win a premiership for coach Wayne Bennett and skipper Adam Reynolds are clear motivating factors driving the Rabbitohs’ end of season push. 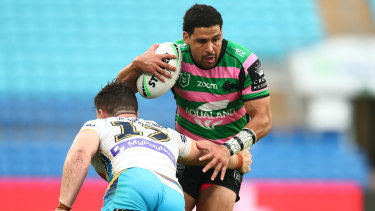 It was also the eighth consecutive week the side has piled on 30 points or more.

Bennett would have been disappointed his side did not put the foot down and win by even more after they led 24-0 at half-time.

Next Friday’s blockbuster against Penrith will be one of the games of the year as Reynolds goes head-to-head with Nathan Cleary, alongside other excellent individual match-ups between Cody Walker and Jarome Luai, Latrell Mitchell and Dylan Edwards, and workhorse locks Cameron Murray and Isaah Yeo.

As the finals creep closer, Souths are also being reminded their time with Bennett and Reynolds – as well as the departing Jaydn Su’a, Dane Gagai and potentially Benji Marshall – is nearing an emotional end. 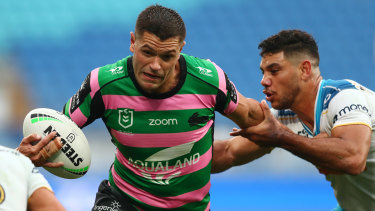 And Walker made a point of discussing the importance of cashing in on the brilliant opportunity the club has with so many stars about to exit.

Unlike Melbourne and Penrith, there is a bit more at stake for Souths this year in terms of key personnel moving on and the need to win the title in.

When Reynolds scored approaching the half hour mark of the game, Steve Roach spoke for most fans on the TV commentary when he said: “He’s a brilliant goalkicker, a brilliant player and a local junior. Hello, how could you let him go? A shocking decision.”

Walker said of parting company with Brisbane-bound Reynolds: “There are a lot of people who are in their last year at the club, Wayne is leaving it could be Benji’s last year, who knows … those are the things that are motivating us.

“I’ve played with Reyno since 2016, it’s sad to see him go, but we’ve got plenty of time to go in the season to create something special.”

The Titans are Queensland’s only hope of having a side represented in the finals, but are now a big chance of missing out. They came into the game on the back of three straight wins, but now must dust themselves off and play a record-chasing Melbourne on Thursday night.

The sight of Mitchell charging down the touchline late in the game and being stopped by AJ Brimson, then hitting the line to set up Josh Mansour for his second try late in the game, was a wonderful one for Souths fans.

“He does things not many people can do, he’s a once-in-a-generation-type player, and when he’s in these type of moods, you just give him the ball and let him go,” Walker said.

The last time Souths lost it was to Penrith in Dubbo when they were on the end of a cricket score.

The only knock on Souths is their defence, which sounds strange when they only conceded one try to the Titans. The Gold Coast did find plenty of open space in the second half.

Braidon Burns bagged a double, as did Mansour, Junior Tatola ran for nearly 200 metres off the bench, and Mitchell and Walker did not disappoint.