‘They’re ready to go’: Stars back for Demons’ mid-season ‘final’

In today’s AFL briefing, your daily wrap of footy news:

Check back for updates throughout the day.

Melbourne have confirmed the return of captain Max Gawn and ruckman Luke Jackson at GMHBA Stadium on Thursday night for the huge clash against Geelong that coach Simon Goodwin said “feels like a final”.

The dynamic duo’s inclusion will be a major boost against the Cats after recovering from their respective injuries. 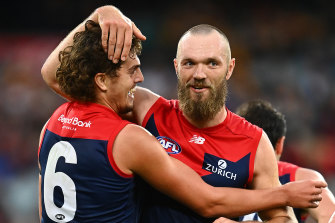 Luke Jackson and Max Gawn are back for the Demons.Credit:Getty Images

Gawn has missed two rounds due to an ankle syndesmosis injury and Jackson was withdrawn the day before Melbourne’s win over Adelaide in round 16 with a knee issue. Without the premiership ruck pair, the Dees used Sam Weideman and Mitch Brown in their place.

Melbourne coach Simon Goodwin said on Wednesday morning that he was confident the star combo were in good form to return to the fold.

“I wouldn’t be playing them if they weren’t 100 per cent. They’re ready to go,” Goodwin said.

“Both guys were really touch and go to get up for last week,” Goodwin said. “Max had an incredibly strong session on Saturday in Adelaide and ‘Jacko’ was very similar back in Melbourne.”

Goodwin said the timing could not be better as they prepare to come head-to-head with the team that most threatens their top-rung position this season.

“They’re a big part of our footy team and to get them both back in at once is really exciting,” Goodwin said.

Melbourne beat Geelong in all three games against them last season, including an 83-point thrashing during the preliminary final. Goodwin believes his team is up for the challenge presented by the Cats, who have won six consecutive matches and will be playing at home.

“It’s exciting, it feels like a final and our players are looking forward to it,” Goodwin said.

“There’s no bigger challenge than to head down to Geelong and play on their home ground.”