The secret to Kurt’s Origin success 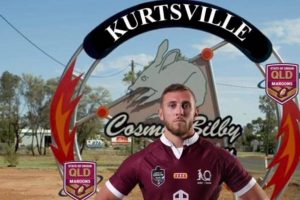 Queensland centre Kurt Capewell has made the stunning admission that he would not be playing for the Maroons but for the influence of his former long-time Ipswich coaches Ben and Shane Walker.

The versatile 27-year-old Panther will line up at centre for Queensland in the State of Origin series opener in red-hot form and with his confidence sky high after receiving a welcome call from Shane Walker on Monday while in camp.

Capewell joined the Ipswich Jets under the Walker brothers after leaving Ipswich Grammar School and spent time in the Broncos and Roosters systems before returning to Ipswich where he was a key figure in the 2015 Intrust Super Cup premiership-winning outfit.

His career then kicked off at the Sharks and now at Penrith, and he was rewarded with a Maroons debut last year in Adelaide where, playing centre, his line break and stunning chip kick led to a try to AJ Brimson that turned the match.

Capewell played the entire series on one leg in the centres and back-row and said he now had the belief and game awareness to take on any challenge, thanks to his mentors.

“I definitely wouldn’t be here without Ben and Shane. I have leant on them throughout my entire career,” Capewell said.

“It was awesome to be a part of the series win last year and I got a bit lucky with that chip kick, but Ben and Shane have given me the confidence to back myself in those sort of situations, so when I do get those opportunities I don’t second-guess yourself.

“I spoke to Shane about two hours ago. He gave me a ring just to say ‘congrats’ on my selection.

“They are both always there to help, and when they ring it is always to give me praise. That boosts your confidence, and on top of all that they are very smart footy heads, and it is just good to have them on my side.

“They make you believe, and that is a big thing with rugby league.”

Penrith recruit Kurt Capewell would prefer to see Origin in the Sunshine State but for now he's happy if the Maroons are based in his new backyard at the foot of the mountains. STORY: https://t.co/tZZxJ30WBmpic.twitter.com/CXq9RGRWw9

After growing up in Charleville, Capewell’s move to the big smoke of Brisbane was always going to be a challenge, and once again it was the Walkers who were there to help.

“When I first moved down to Brisbane after school I lived with Ben. Then after that I moved into the city and lived with Shane,” Capewell said.

“I would have struggled to live in the city without them helping me out, and obviously their wives were second mothers to me … cooking and cleaning for me and teaching me the house rules. I owe a fair bit to them.

“Ben and Shane are very close family friends. Even if I wasn’t playing footy, I would talk to them just as much. Of course, they did get me playing that fun type of footy that everyone loves to watch.

“I didn’t get where I am the quickest way, but it is good to be finally playing regular NRL and for Queensland. I’m living the dream.”

“Last year in Adelaide he came up with a chip kick for a try and it was a match-turning play. He plays what is in front of him and it has worked at every level for him,” Renouf said.

“That’s the style of footy he played growing up in Charleville and then when the Walkers started coaching him he took it to the next level. When the Walkers coach a team they identify the skill and talent in each individual and encourage them to show it.

“We had Darren Smith for Queensland in my day and he played what was in front of him. He was big and tough enough to play in the second-row, and in the centres he was arguably one of the best running around. Capewell has that same kind of versatility.”