Home » Rugby League » The other Panther: Capewell wants last laugh against his mates in Blue

The other Panther: Capewell wants last laugh against his mates in Blue 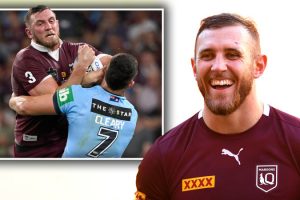 Kurt Capewell is the other Panther. The one that plays for Queensland. He hasn’t rolled into camp with the swagger of clubmate Jarome Luai but he’s ready to roll up his sleeves again as he bolsters a Maroons side convinced last year’s upset was anything but an aberration.

The Blues have six Panthers in their squad, including the glamour halves pairing of Luai and Nathan Cleary, while Capewell is the sole representative from the premiership favourites north of the border. He’s understated, under the radar and wouldn’t have it any other way. 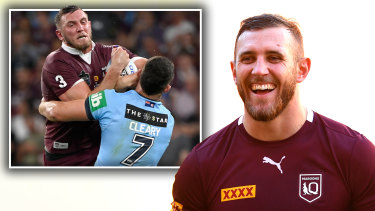 Queensland’s Kurt Capewell will line up against six of his Panthers teammates on Wednesday night.Credit:NRL Photos

He approaches this year’s series in a completely different physical state than 2020, when he was one of the players who went through to a grand final then rattled off an Origin series just a few weeks later. Capewell was only able to play nine games for the Panthers last year as he struggled with a knee injury.

“I feel a lot better this time. It’s not after a full season. The body is holding up well but I loved it last year, I would have played with a broken leg,” Capewell said. “Looking back, when you think of playing a full season, then Origin and three weeks of Origin in a row, it made it a bit tough. But we got away with it.”

NSW are favourites again but the Maroons were able to forge a tight bond under Wayne Bennett, who cobbled together a side of new faces and veterans and was able to convince them they were more than up to the task. In terms of players who were able to surpass most people’s expectations, Capewell was exhibit A.

“There’s a lot of people back from that team and I’m more than confident we can tap back into that feeling from last year. It’s awesome to see everyone and the bond is still there and strong.

“We’ve been playing well at club level but I’m keen as to pull on the jersey and play next to these fellas again. I had that much fun last year, I can’t wait.”