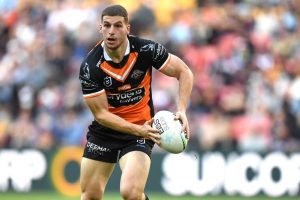 Adam Doueihi wants to stay as the six shooter at the wild Wests Tigers for the rest of the season and has opened up about how he responded to coach Michael Maguire’s call for “accountable men” to stand up for the battling club.

Doueihi turned in a masterclass in the 42-24 comeback win over the Broncos, with five try assists in his first starting game at five-eighth since round 9 to get the club back in the finals hunt.

The 22-year-old was emphatic when asked whether he wanted to stay there for the rest of the year.

“I do, and as long as we keep winning I guess Madge will keep me there,” Doueihi said.

“I am obviously pleased. We haven’t been getting the results we wanted lately, so Madge wanted to make some changes and luckily for me I am back in the six jersey. It is the position I enjoy and my preferred position.”

Maguire said after the “garbage” loss to the Rabbitohs in round 17 he was looking for some “accountable men”.

7 tries & 15 try assists for Adam Doueihi in 15 appearances this year. Straight shoot out with Daine Laurie for WT Player of the Year honours

After the win over the Broncos, where the Tigers scored 32 points in the second half, the coach said he had found his “men”.

Doueihi certainly took accountability with a man-of-the-match performance and said he wanted to do Maguire proud in a likely two-month stint in Queensland that he called a “second chance” for the club to make up for lost ground. He said he took no offence at Maguire’s now infamous call for accountable men.

“We feel for him. We all feel that we have let him down and the organisation down,” Doueihi said.

“We sat down early this week and we wanted to make this sacrifice worthwhile for us. We want to look back after eight weeks and say that we have done ourselves, our families back home and our club proud.

“We are one from one. We will enjoy the week, dump it as soon as possible and all eyes on Manly.”

The Tigers feature on Fox League this week in a four-part documentary called “Wild Wests: Tales from Tiger Town” from Monday night.

Doueihi grinned and said the tales would be “very wild” and a great window into the club’s operations.

“It will be a good insight for our fans and the rest of the NRL community to see inside the four walls of an organisation,” he said.

“It will open up to a few things we do inside, on the training paddock and what Madge says in the box. There might be a few swear words from Madge.”

The Tigers are on 14 competition and just two points outside the top eight. Maguire said there was “a massive opportunity ahead of us” with finals football still up for grabs.

Doueihi said a key to taking that opportunity, starting with Manly on Saturday night at Suncorp Stadium, would be the squad binding together in their Brisbane camp.

“I am single. A few of the other boys have made bigger sacrifices,” Doueihi said.

“We will have to keep in touch with them, look after them and make sure mentally they are all OK.

“Winning helps our mindset. We are a tight-knit group. We are sticking together and we have looked further ahead.

“We are one from one up here, so we will look at where we can improve and maybe we will have some more opportunities and identify some weaknesses in Manly and go after them.”