Home » ‘Tex’s ring’: The drill that helped Taylor Walker get back to his brutal best

‘Tex’s ring’: The drill that helped Taylor Walker get back to his brutal best

After every main training session this pre-season, and still occasionally during the 2021 season proper, Taylor Walker and his fellow Adelaide “big boys” head down to the forward 50 to get their hands dirty.

“They come into Tex’s ring and they go at it,” says Adelaide’s forwards coach James Rahilly of the contested marking drill that Walker created. 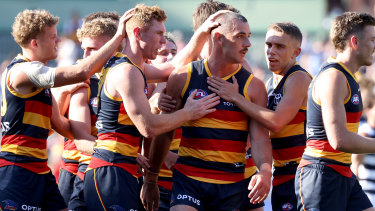 Taylor Walker is congratulated by teammates after scoring in the Crows’ win over Geelong in round one. Credit:Getty Images

“He doesn’t like to get beaten … He has improved himself [in contests] and brought others along with him.

“For some reason he always wins [the drill]. He codes it and does the scoring, no one else is there to see that but he wins every time. There’s a lot of heated debate from the [Elliott] Himmelbergs and the [Billy] Framptons and the like. It’s all good fun.”

There have been many factors in Walker’s resurgence – he led the Coleman Medal race by five goals before the start of round five, on 20 majors after four rounds – but improving his contest work has been key.

Walker looked a defeated man, finished even, after his 14 games in 2020. He is only 30 but there were serious questions about whether he would go on.

Captain at the time of the 2017 grand final loss and the subsequent drop-off following that, Walker wore an astonishing amount of criticism from pundits and fans on social media, pilloried for his leadership, response to the infamous 2018 pre-season camp and his public comments when Jake Lever was leaving for Melbourne.

His leadership and performances had been lauded following the death of coach Phil Walsh only two years earlier.

Creating the contested marking drill and launching into this pre-season speak to a rejuvenation for Walker that has focused on covering off the basics. 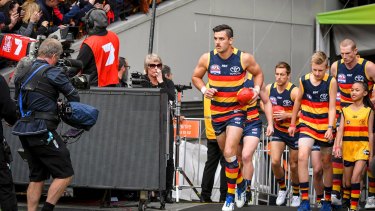 Walker leads Adelaide onto the MCG in the 2017 grand final. Credit:Eddie Jim

On that 2021 pre-season work, Rahilly said the star forward led the team exceptionally through that period.

“I was able to see the amount of work they did,” Rahilly said of the period before pre-season, as the Crows’ interstate players were told to stay in South Australia due to COVID-19. “About 20 guys getting together and training and Tex was leading that.

“So they had a great run into pre-season and then the pre-season, Tex said himself it is one of the best he has had for a while and there’s no doubt he is fit. For a big man he does run well, he is at the pointy end with the running groups and he is just looking strong as well.

“Yes, he is a good lead-up player but we have seen him in contests this year and most times he is one-on-one he is beating his opponent, and that’s what I have been pleased to see.”

Rahilly says the new rules have helped Walker, particularly in round one, but it would be too simplistic to say that was why he was leading the Coleman Medal.

“Round two it was all about his pressure. I don’t know he got many hit-ups that day but he got goals and score involvements from his pressure against the Swans.

“And then round three against the Gold Coast he brought contested marking into the game, scoring from winning one-on-ones or one-on-twos.

“You could just tell he was so motivated to have a good year and I told him I was here to support him. I gave him a few ideas on how I think he can improve his game but to be honest, I have been there just to guide and support. He has really done it all himself.”