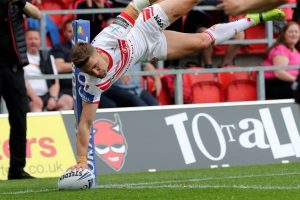 There aren’t many one-club players in the modern game – and Tommy Makinson and Adam Milner have epitomised everything good about St Helens and Castleford during their careers.

Both have their testimonial matches this weekend and deserve to be well supported for their efforts over the last decade.

I first came across Tommy properly during the 2018 test series with New Zealand when I was England manager and he ended up winning the Golden Boot. He was absolutely outstanding – world class in every game.

People talk a lot about his spectacular finishes but what stood out for me was his ability to carry the ball with no thoughts of self-preservation.

I believe Justin Holbrook coming to St Helens helped turn Tommy from a very good Super League player into an international class one – and fingers crossed we get to see that for England in the World Cup this year.

He’s everything you would want from a winger – he carries the ball 20 times a match, is fast, elusive and brave under the high ball. And then there’s his finishing – he gets his body into some unbelievable positions to score those unforgettable tries.

Adam Milner is one of those players that you only appreciate fully when you line up alongside him. He’s a players’ player that does all the little things well and that’s the biggest compliment for anyone.

He’s somebody else I worked with for England and although he’s a no-nonsense kid, he’s also very skilful with a good rugby brain.

I think that helped him adapt and move from hooker to loose forward, and he’s been one of the reasons Castleford have been so resurgent under Daryl Powell.

He plays at eight or nine out of 10 every week and does the unglamorous stuff that allows the team to be successful.

He’s also a guy who plays well above his weight – I remember that from playing against him, he hits and runs harder than you think.

Both players have been very loyal to their club and I hope they get plenty of backing this weekend and for the rest of the year.