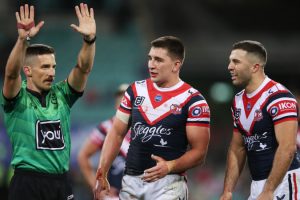 James Tedesco has declared the Roosters won’t be changing their tackling technique as a result of the NRL’s latest crackdown after Victor Radley was handed a five-week suspension for a high tackle in round 11.

Radley said he would not be changing his tackling style after was rubbed out of Origin I and II by the judiciary over the tackle on Tevita Pangai jnr at the end of last month. Speaking from Origin camp, Tedesco backed Radley’s stance. 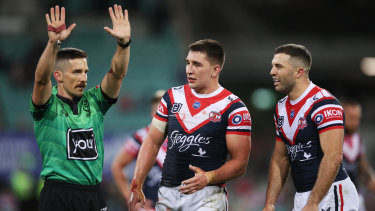 Victor Radley is sent to the sin bin by referee Peter Gough for his tackle on Tevita Pangai jnr in round 11. Credit:Getty

Tedesco said he was confident Radley would have been selected to play for NSW if it wasn’t for the hefty suspension. “I don’t think he deserves to miss that amount of time,” he said.

“We love Victor, the way he plays. He’s aggressive, he puts shots on for us and he changes games but we just have to be more aware now.

“I agree with him. I don’t want him to change.”

Angus Crichton, who was also handed a suspension for a late shot in round 11, will return to the game this week after a fortnight on the sidelines.

But the big team news lies north of the border, with Karmichael Hunt to make his first appearance for the Broncos since 2009. 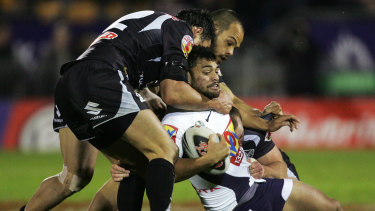 Karmichael Hunt will make his return for the Broncos after a 12-year absence.Credit:Getty

The 34-year-old will join Albert Kelly in the halves after featuring in the club’s last premiership win in 2006.

Teammate Kotoni Staggs, however, has been banned by the NRL until round 16 after a woman contacted the governing body to complain about his conduct at a Brisbane pub earlier this year.

Staggs was due to return this week from a knee injury but will now be required to complete education and personal rehab programs over the next two weeks. He was also fined $20,000.

Bulldogs coach Trent Barrett, meanwhile, received a $5000 suspended fine from the NRL after implying match officials had a preconceived desire to penalise Jack Hetherington in round 12. Hetherington was penalised twice on his return from a five-week ban against the Panthers.

Manly coach Des Hasler criticised match officials in the same round and received a warning from the NRL this week as a result.