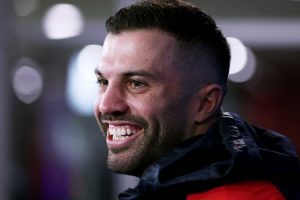 James Tedesco, rugby league’s premier No.1, has declared he is open to the eventual switch into the halves if it means keeping him, Joey Manu and Joseph Suaalii at the Sydney Roosters.

Arguably the game’s best player will run out for his 200th NRL game on Saturday afternoon in what will be an emotional day for both clubs because of their ties to the late Paul Green.

Tedesco battled a string of shocking injuries when he started out and took forever to reach 100 NRL games.

The next 100 games have come about a lot quicker, and included a couple of premierships with the Roosters.

Tedesco said he would love to reach 300 NRL games, and provided his body held up to the weekly rigours of first-grade football, try to play on until he was about 35, which would take him through to the end of the 2027 season.

The Roosters, NSW and Kangaroos pin-up, now 29, is still the game’s premier fullback. For that reason alone, younger teammates Manu, 26, and 19-year-old Suaalii will need to wait a while to be granted their No. 1 wish. 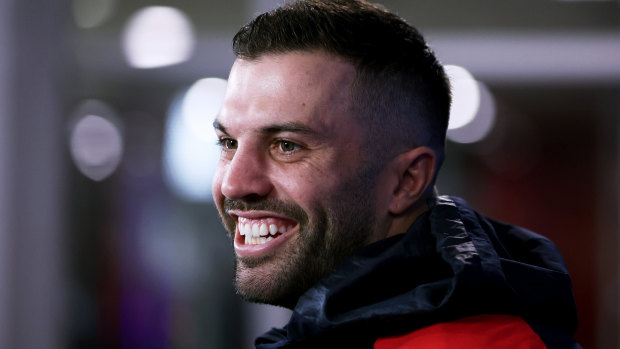 The most romantic and simplest solution for all parties would be for Tedesco to depart at the end of 2024 when his current deal expires, rejoin the Wests Tigers – a club that have never truly recovered from losing him in the first place – which would give Manu and Suaalii their chance to wear the No.6 and No.1 jerseys.

Tedesco is well aware of the three-into-one scenario at Bondi. He loves the Roosters, they love him, he loves coach Trent Robinson, and it is where he continues to be the best version of himself.

As Roosters legend Anthony Minichiello said: “Teddy has built a wonderful career here at the Roosters. There’s no way I can see him in another jersey.”

Tedesco told the Herald he speaks with Marshall all the time, but there would be no fairytale return.

The bigger appeal would be working out how to get the most out of him, Manu and Suaalii, even if it meant moving into the No.6 role in his final years. 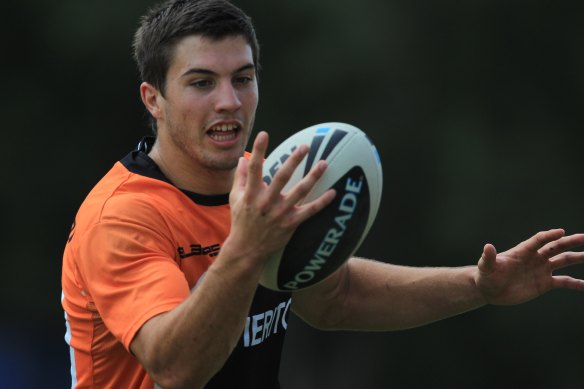 James Tedesco training with the Tigers before making his first-grade debut.Credit:Steve Christo

Suaalii’s preference is fullback, while Manu will turn heads in the No.1 for New Zealand at the World Cup.

“It’s hard because everyone wants to play fullback,” Tedesco said.

“It’s the position where you get your hands on the ball the most, and you’re allowed to be free, which a lot of young players want to do. You can’t blame them for that.

“It’s tough because Suaalii and Joey love to get their hands on the ball and are top-notch footy players.

“Suaalii always comes to the fullback meeting and wants to learn. It will be interesting to see what happens. He is also one of the best wingers in the game right now.

“I played five-eighth for Italy at the World Cup. It could be an option down the track. You never know. The fullback and five-eighth roles are the same these days. You see [Cameron] Munster do it at Melbourne.

“It requires a different fitness. Fullbacks do a lot of running, but five-eighth you’re a lot more forward and making more tackles. 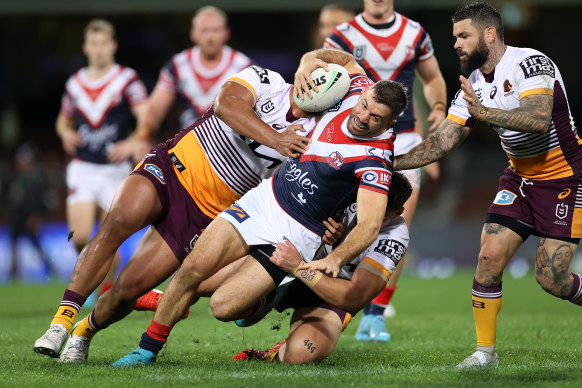 “I’ll leave it to Robbo. I do know every club would want Suaalii and Joey at their club.”

Tedesco speaks regularly with Marshall, and the Tigers’ legend even reached out to him about a homecoming.

“Benji lives down the road from me, and before he was even announced as head coach at the Tigers, he texted me about coming back,” Tedesco said.

“I never thought he was serious at the time. He was appointed coach and then all these stories came out about me [returning].

“I’m close with Benji but I’m very happy at the Roosters. Robbo also signed on for another five years this year, and that’s a big factor for me. He’s the best coach I’ve ever had. I can’t thank him enough for not only what he does for my game and confidence on the field, but how he has helped me as a leader off the field.” 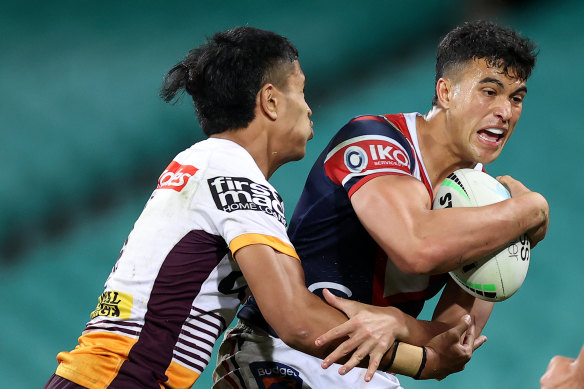 Joseph Suaalii has been a standout on the wing, but wants to be a fullback.Credit:Getty Images

Robinson has run out of superlatives to say about Tedesco whenever the pair attend post-match press conferences after a win.

The fact Tedesco is able to shine in a team with so many superstars makes his performances extra special.

That point was not lost on Parramatta skipper and Tedesco’s regular golf partner Clint Gutherson, who said: “He has been the best player in the game for five or six years now. Just his consistency every week, you don’t see it often, and especially in a team where there are so many other players who can take the spotlight off you.”

Tedesco ruptured his anterior cruciate ligament in his left knee on debut for the Tigers. He later suffered a syndesmosis injury, smashed the kneecap in his same left knee – Tedesco has since reached out to Ryan Papenhuyzen who suffered the same long-term injury – broke his jaw, cracked the scapula in his shoulder, and required up to half a dozen clean-outs of his knee.

But since 2017 Tedesco, with the help of a large support network, including his mentor Joe Wehbe and massage therapists, has stayed on the field to produce some breathtaking football.

The kind of football that will trouble the Cowboys at the SCG, help continue the Roosters’ surge to September, and ultimately lead to “Teddy” one day entering the Immortal debate.