Home » Rugby League » Ted and buried: Blues down and out after Tedesco exit proves knockout blow

Ted and buried: Blues down and out after Tedesco exit proves knockout blow

The sickening thwack of forehead on kneecap is a sound no one wants to hear at any time, no matter where it happens.

In the 20th minute of a deciding State of Origin match in Brisbane, it tends to change the fate of an entire series. 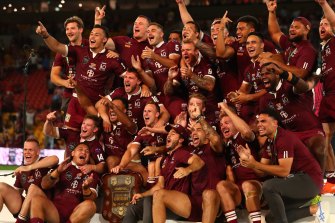 The scores were locked at 6-6 but the loss of the Blues’ best player, and their stand-in captain, was a hammer blow from which Brad Fittler’s side never recovered …

In a heart-stopping final few minutes, in which Maroons fullback Corey Allan was sin-binned for taking out winger Josh Addo-Carr, the Blues fell agonisingly short.

The 20-14 victory means a Queensland team coached by Wayne Bennett, with Mal Meninga as his assistant, missing Michael Morgan and Kalyn Ponga because of injury, that blooded no less than 14 players across three matches, that started rank outsiders with the bookies across three matches, just won the series — in the middle of November. 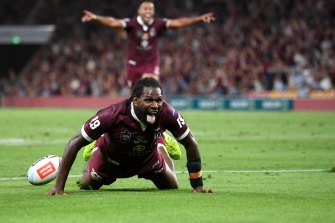 If anyone had presented this scenario even a few months ago, you’d have taken a leaf out of Bennett’s book and suggested a drug test.

In the strangest of strange seasons, however, the Maroons’ shock series win probably makes sense, although none of it will line up for the Blues.

While questions will be asked of NSW and their inability to get the job done in the decider, and the platitudes will be laid on with a trowel for the Maroons in the days to come, this match will always be remembered for Tedesco’s early and sudden departure. 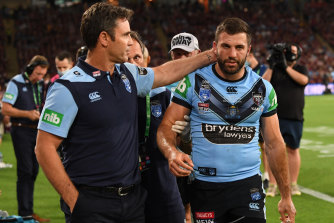 Brad Fittler consoles James Tedesco as he comes from the field with concussion.Credit:Getty Images

Straight away, Munster twirled his moustached, licked his lips.

He’d been dominant enough as it was down that left side, setting up the opening try for Valentine Holmes after a handful of minutes.

With four minutes remaining in the first half, he found more space down the left edge, kicked for himself, regathered, kicked again, found the ball in his hands once more, then saw more space on the right, hooking a third kick across the field for debutant winger Edrick Lee to score, giving the Maroons a 12-6 lead.

Get all that? NSW didn’t.

The most telling part of that frantic sequence was that Munster’s second kick was fumbled by NSW winger Daniel Tupou, who had scrambled across in a desperate attempt to snuff out the play.

Normally, it would’ve been Tedesco. For all his trickery in attack, it’s easy to forget the Roosters superstar's importance in defence.

In the second half, NSW missed him in other ways, mostly his searching runs through the middle of the ruck on play two after hooker Damien Cook had made his trademark early run out of dummy half.

With no momentum behind then, the Blues instead spent most of the half grimly defending their try line.

'Of all the fake news this series, the hardest to swallow has been the claim this is the weakest Maroons side in 40 years of Origin.'

Nothing went right. The kismet they enjoyed in Sydney last week had dried up. Knock-ons, accidental offside, penalties off the busy whistle of referee Gerard Sutton that could’ve swung either way went against them.

Then there was Maroons rookie Harry Grant to contend with as he initially turned the Blues around out of dummy half before shifting to lock to work in tortuous tandem with Munster.

They were, indeed, ugly scenes. A Holmes penalty goal in the 57th minute extended the lead to 14-6 but the advantage should’ve been far more.

When Grant reached out in a tackle out in the 63rd minute to score, the deal should've been sealed.

A try to Tupou in the 65th minute edged the Blues closer. A Nathan Cleary penalty in the 70th brought them back to within six, setting up the obligatory grandstand finish.

Of all the fake news generated throughout this series, the hardest to swallow has been the claim this is the weakest Maroons side in 40 years of Origin football.

It was a view shared by few, said publicly by even fewer, but the storyline grew like wild vine, as they tend to do in Origin.

There is no dispute, though, that Bennett’s side lacked firepower and strike in comparison to NSW.

That glow you can see on the horizon is the angry mob coming for Fittler after losing the apparently unlosable series.

The cross-examination will be brutal as it always is but, like 1995, maybe there’s no other answer than the fact they were playing Queensland.