Super League: Leaders Saints come from behind to stun Salford for 32-30 victory 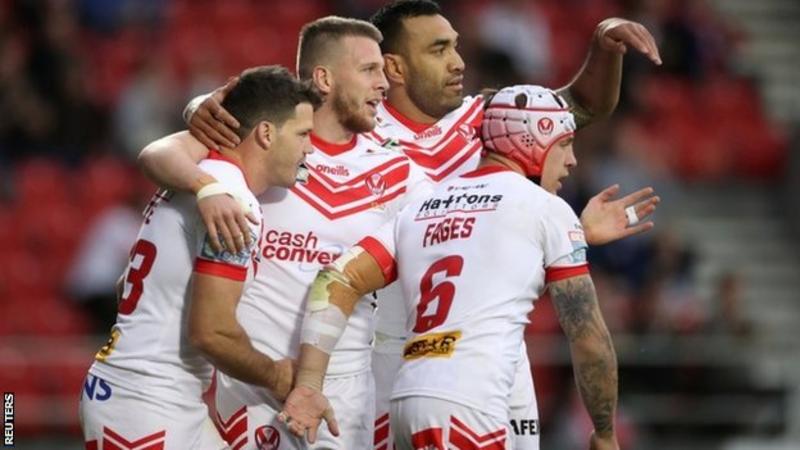 Evalds’ second and Rob Lui’s try put Salford into a 30-16 lead but Saints hit back to score three times.

Coote and Makinson scored again and a James Bentley try was given on review.

It looked as if the youngster may have lost control crossing the line in the dying seconds but the video referee gave it and Coote kicked the goal, to send Saints six points clear at the top.

It was yet more heartbreak for Salford, who were also 24-8 up with seven minutes left on this ground two seasons ago and still lost in equally dramatic circumstances to a Matty Smith drop-goal after the hooter.

On a night when they could have gone third, the Red Devils were instead left to contemplate their latest failure to win an away game against St Helens for a first time since 1980.

Coote scored twice in three minutes as Justin Holbrook’s side made a perfect start, his first following a great 50-metre break from Welsh winger Regan Grace, in which he outstripped four opponents.

Theo Fages’ well-timed pass then set up Coote for his own converted second try before also creating Makinson’s try in the corner with a delayed pass.

But former Wigan prop Gil Dudson barged over for a try, for the first of five conversions by Krisnan Inu, who also created full-back Evalds’ 80-metre dash to the posts for the second try.

Salford then snatched the lead when Lui’s kick to the corner was patted infield by Inu and Olpherts produced a determined finish from close range.

Lui’s break and strength created the space for Evalds’ second touchdown before taking centre stage himself on the hour mark, with a superb solo try from 15 metres out.

But it is never advisable to write off Saints – and back they came to score three times in the final 15 minutes.

Coote completed his hat-trick before Makinson brushed aside a weak dual challenge before accelerating to the right corner.

Coote’s left-footed touchline conversion crucially cut the deficit to just four points – and, when Bentley’s try was allowed to stand, Saints had completed yet another of their amazing comeback victories.

“I am happy to win that one. What an entertaining game of rugby league. Massive credit to the players to storm back in the way they did.

“We started well, but we knew if we gave Salford any opportunities they would take them and scored some good tries.

“The good thing is that we stayed calm and you have got to win all different ways during the year. We will learn a lot from this, but to get the two points was massive after being in a really tough spot.”

“To come from 16-0 down and show that determination and desire and get into a really good position at Saints is a tough one to take.

“Saints turned the heat up when they got a sniff and we gave away penalties and too much possession. But I’m pleased about the work the boys put in. If they can do that every week, they can compete with the top teams.

“When we have done the right things in games and kept to processes we have beaten teams. Hopefully a performance like that will give those players that belief in themselves.”