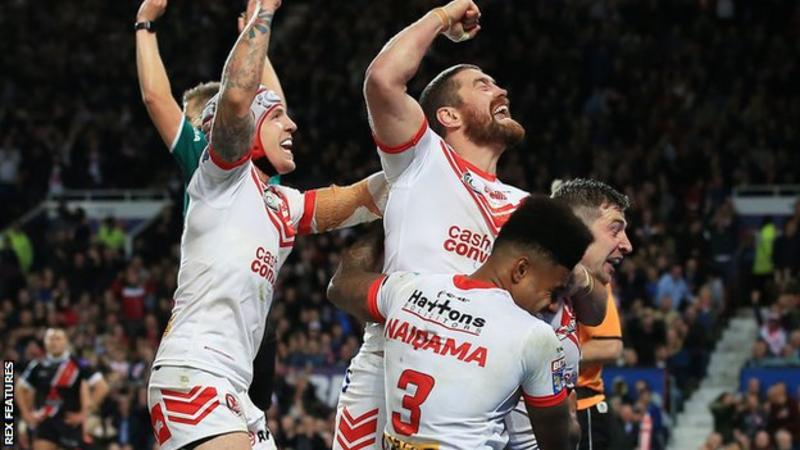 Morgan Knowles got Saints off the mark and Zeb Taia extended their lead before Jake Bibby responded for Salford.

After the break, Mark Percival scored a sensational try from his own short grubber kick right under the posts.

The win was wrapped up thanks to Tommy Makinson’s 40-metre drop-goal on the verge of the full-time hooter.

The win ends a spell of five years without major domestic silverware for St Helens, who were defeated on the way to the Grand Final in the past two Super League play-offs in addition to their defeat by Warrington in August’s Challenge Cup final.

The wait goes on for Salford, meanwhile, who were playing in their first Grand Final and have not won a major honour since their title win of 1976.

St Helens came into the match with a week’s rest having beaten Wigan in the first semi-final on 27 September and their freshness showed as Salford looked wasteful when in possession.

Wales international Knowles touched down for his fifth try of the season, with Taia running in after Ken Sio cheaply knocked on inside his own 10 as Saints turned the screw.

Tui Lolohea looked to have powered in with an immediate response for Salford but his impressive solo run-in was ruled out for an obstruction in the build-up, however a good spell for the Red Devils culminated in Bibby’s try.

Man of Steel winner Jackson Hastings, in his final game for Salford before moving to Wigan next season, was the cornerstone of Salford’s fightback, but Percival’s score inspired Saints to victory.

If anyone needed a reason for why this Saints side have been said by some to be the greatest team of the Super League era, Percival’s second-half try is it.

With Salford fighting back to end the first half toe-to-toe with St Helens after they had scrambled to defend thanks to Alex Walmsley and Luke Thompson’s fine spells in the early stages, Saints set the tempo for the second period.

Despite Salford valiantly holding their own, moments of sheer brilliance like that of Percival’s score are hard to prevent.

Running across the pitch looking for space, Percival took matters into his own hands and kicked a neat grubber kick at a slight angle past the Salford back line and picked his moment to run through a wall of Salford players to regain the ball and touch down under the posts.

Occasions of individual prowess like that usually come around once in a while but at some points in the Justin Holbrook era, Saints look like they could create moments like that every week.

It was an event that turned the game into their favour and opened up a formidable 12-point lead on their opponents, and they comfortably saw the game out thanks to Lachlan Coote’s boot.

In May of 2017, St Helens were seventh in Super League and without a head coach after club legend Keiron Cunningham parted ways with Saints the month before.

In stepped Holbrook, who moved to the northern hemisphere for his first full coaching job, having previously been part of coaching teams at NRL sides Sydney, Canterbury, St George and Parramatta.

The Australian has revolutionised Saints and transitioned them into arguably one of the greatest sides in Super League history after a lull in silverware after their Grand Final triumph in 2014.

A League Leaders’ Shield win in 2018 was followed in August by a first Challenge Cup final appearance for over a decade.

Those achievements were overshadowed, however, as Holbrook’s side failed to turn their fine form over the course of the season into trophies as they were defeated by Warrington in last season’s Super League play-offs and this year’s Challenge Cup final at Wembley.

However, another League Leaders’ Shield win followed this term, as Saints finished a whopping 16 points clear of second-placed Wigan, who they went on to thrash in the first of this year’s Super League play-off semi-finals.

That win sent them on their way to a first Old Trafford appearance for five years and they made easy work of seeing off a Salford side who looked unfazed when facing Super League’s elite this season.

Only four teams had won a Super League title going into this season’s Grand Final under the lights at Manchester United’s Old Trafford, which illustrates the task Salford had to cause an upset.

What would have been a fairytale story for the ages was not to be.

A side that many wrote off as relegation candidates once more at the beginning of the season almost went all the way to beat one of the most formidable sides that Super League has ever seen.

Salford have been the story of the season and, under Ian Watson, have experienced a remarkable year on their way to just their first Grand Final.

Just 12 months ago, the Red Devils were battling against relegation and looked a million miles away from a play-off spot, let alone a place in the greatest game’s showpiece.

But, having demolished Castleford and Wigan on their way to the final, Salford could not rekindle the magic that saw them earn their appearance despite Bibby’s first-half try giving the 13,000 travelling Salford fans reason to believe.