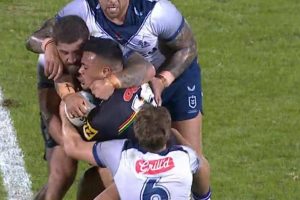 Melbourne Storm superstar Cameron Munster could find himself in hot water with the match review committee after he appeared to attempt a hip drop tackle during Thursday evening’s thrilling loss to the Penrith Panthers.

In the first half at Panthers Stadium, Penrith reserve Spencer Leniu was wrenched in a sickening tackle involving three Storm players.

Munster pulled down on the Penrith forward’s body, and Leniu landed awkwardly with his legs bent behind his back.

The 20-year-old screamed in agony as Nelson Asofa-Solomona and Kenneath Bromwich fell onto his body.

Regardless, a chorus of boos echoed around the venue as replays of the suspicious tackle were shown on the big screens.

Could Cam Munster be in trouble for this tackle?

Fox League commentator Andrew Voss said: “That looked awkward at the finish too.

“He got twisted over the back and more than a grimace from the young Panthers forward.

“It is all very awkward and you look at the weight in that tackle.”

Melbourne great Cooper Cronk responded: “He is in trouble.

“We saw Munster on the legs trying to roll him onto his back and the knee and the ankle got caught underneath.”

No penalty was awarded for the tackle, but Munster will regardless be sweating on whether the match review committee intervene.

Following a tightly-contested arm wrestle in Penrith, the Panthers emerged 12-10 victors to remain undefeated in the 2021 premiership.

Penrith second-rower Kurt Capewell scored a match-winning try with some fancy footwork in the 78th minute to muster a nailbiting two-point victory over the defending premiers.

No other sport competition in the world delivers as consistently as #NRL. What a game. #NRLPanthersStorm

After recording a team-high 136 metres in the first half, Panthers fullback Dylan Edwards was withdrawn from the contest with a suspected hand fracture.

The 25-year-old is potentially looking a several weeks on the sidelines depending on the injury’s severity.

NRL.com reporter Chris Kennedy tweeted: “Huge blow for Penrith, he was probably best on ground in that first 40.”

Dylan Edwards ruled out for the night with a suspected fractured hand.
Best case: small fracture/minor surgery, 2-4 weeks return to play.
If more significant fracture or location with poor blood supply can extend recovery time out to 6-8 weeks. pic.twitter.com/RBIgd8KQzd

After a disappointing performance against the Parramatta Eels last week, Storm hooker Brandon Smith was a standout in the first half.

The 24-year-old dived over for the first try of the evening before putting a vicious tackle on Matt Eisenhuth.

Scores were tied at 6-6 with 16 minutes left on the clock when Melbourne speedster Josh Addo-Carr dived over on the left wing, but Edwards’ late heroics flipped the script.

Melbourne Storm centre Justin Olam almost spoiled the party by claiming a try after the final siren, but Viliame Kikau’s miraculous save prevented the late four-pointer.

The Storm will next host the Brisbane Broncos in Melbourne, while Penrith will take on the Sea Eagles next Thursday evening.