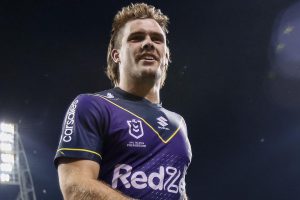 Storm fullback Ryan Papenhuyzen is set to extend his stay at the club following Craig bellamy’s decision to stay.

Meanwhile the Broncos have five big name halves in their sights including two from the UK Super League.

Read on for all the latest NRL Transfer Whispers.

On the back of Craig Bellamy’s decision to stay with the Storm for another season it appears star fullback Ryan Papenhuyzen is set sign a two-year extension.

The Sydney Morning Herald reported Papenhuyzen is close to agreeing to a new two-year extension that will result in him staying put until the end of 2024.

Papenhuyzen is already contracted until the end of next season, but was believed to be waiting for a decision on Bellamy’s future before deciding to extend his deal at Melbourne.

The 22-year-old told Triple M earlier this month that Bellamy’s future would be a factor in his negotiations with the Storm.

“I’m pretty happy with how it is all going and obviously it would be good to see what Craig is going to do as well,” he added.

“That will all be a factor. I’m not rushing through a decision. I think I come off-contract at the end of next year so just keep playing well and let that do the talking.”

Papenhuyzen has scored 28 tries and 173 points for the Storm since his debut in 2019 and won a premiership with the club in 2020 when he took out the Clive Churchill Medal.

The star No.1 was considered a lock to debut for the Blues last season after being included in Brad Fittler’s squad, but an injury in the grand final rubbed him out of the Origin series.

NRL: The Warriors have reportedly rejected Shaun Johnson’s offer to return to the club as he searches for a new deal….

NRL: The Warriors have reportedly rejected Shaun Johnson’s offer to return to the club as he searches for a new deal.

The Broncos have been linked to UK Super League halves Aidan Sezer and Gareth Widdop as their hunt for a big name playmaker continues.

Following Tom Dearden’s departure to arch rivals the Cowboys, Kevin Walters has made no secret of his desire to land an experienced half to help with the club’s rebuild.

Rabbitohs captain Adam Reynolds has been closely linked to the Broncos, but is tipped to sign a monster three-year, $2.4 million deal with the Sharks after Chad Townsend’s move to North Queensland.

Mitch Moses and Shaun Johnson have also been linked to Brisbane, with the Eels playmaker believed to be Walters’ prime target.

However Johnson is considered a more realistic option for the Broncos because he has no ties to Sydney, but the Sharks are keen to pair him with Reynolds in a new look halves duo.

The Sydney Morning Herald’s Andrew Webster believes the Broncos’ bid for Moses is likely to blow the Eels out of the water.

NRL: ARLC Chairman Peter V’landys has weighed in on the conference-system debate and gives his thoughts on what he thinks the NRL will do….

NRL: ARLC Chairman Peter V’landys has weighed in on the conference-system debate and gives his thoughts on what he thinks the NRL will do.

“There is a lot of expectation that the Broncos are going to be quite active in the halfback market after letting Tom Dearden go,” Webster said.

“Mitchell Moses is talking to the Eels at the moment… but their concern is that they’re going to get blown out of the water money-wise by the Broncos.”

As reported by The Courier Mail, Walters is confident he can lure a big fish to the club.

“The plan is to get someone (an established playmaker) and I believe we will,” Walters said.

“I won’t name names but, yes, I’m after an experienced playmaker. That’s my priority and that’s what I am looking for.

“I’m certainly looking at a number of playmakers.

“Everyone can see we need an experienced playmaker and I’m going to the market.”

It is understood that English Super League duo Widdop and Sezer have been tabled to the Broncos.

Widdop, who played close to 200 NRL games with the Dragons and Storm, has been desperate to return to Australia to be closer to his family.

The English international currently plying his trade at Warrington is open to a cut-price deal to move back down under should a suitor for the 32-year-old emerge.

Sezer, 29, departed the Raiders after the 2019 Grand Final to join Huddersfield Giants and has another season to run on his contract in the Super League.

NRL: A proposed conference-style system being adopted in the NRL has been met with a mixed response….

NRL: A proposed conference-style system being adopted in the NRL has been met with a mixed response.

Wakefield’s hopes of luring out of favour Sharks star Andrew Fifita to the club have been stalled by the coaching change at Cronulla.

The premiership winning prop has held talks with the club over a shock move to Super League to reunite with twin brother David.

Fifita has failed to play first grade this season at the Sharks and was suspended while playing in the NSW Cup with Newtown Jets.

But coach John Morris’ sacking has since left the door open for Fifita to earn a place back in the squad.

“They spoke probably three or four days ago. Nothing has changed their end with regards Andrew.

NRL: With pressure mounting on Tigers coach Michael Maguire following the side’s 1-6 start to the year, his players have come to his defence….

NRL: With pressure mounting on Tigers coach Michael Maguire following the side’s 1-6 start to the year, his players have come to his defence.

“The new coach or the assistant coach, who is the interim coach, has said it’s pretty much a clean slate. He’s suspended for three games, he’ll get an early indication if it’s a clean slate once that suspension is up in two weeks time.”

As a result, the club is looking at other options across the NRL, with Trinity recently freeing up a quota spot after releasing Adam Tangata, who has returned to Halifax Panthers.

“I think there’s a lot of upheaval at the minute in the NRL, a lot of players being moved from club to club. We will sit patiently and see what happens over the next couple of weeks.”