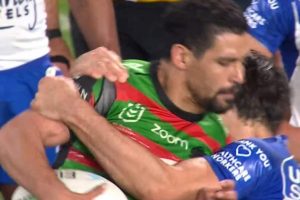 The wild and seemingly unprovoked tackle appeared to catch even the most seasoned NRL fans and commentators off-guard with the bizarre scenes coming from nowhere.

While the high-flying Rabbitohs ended up winning the match against the last-placed Bulldogs 32-24, the brain snap after the halftime siren had tongues wagging.

Lewis — the nephew of rugby league great Wally — appeared to be in a good mood as they walked from the field before the WWE move took things a little too far and saw him sent to the sin bin for his trouble.

“It’s hard to explain why he did this.” 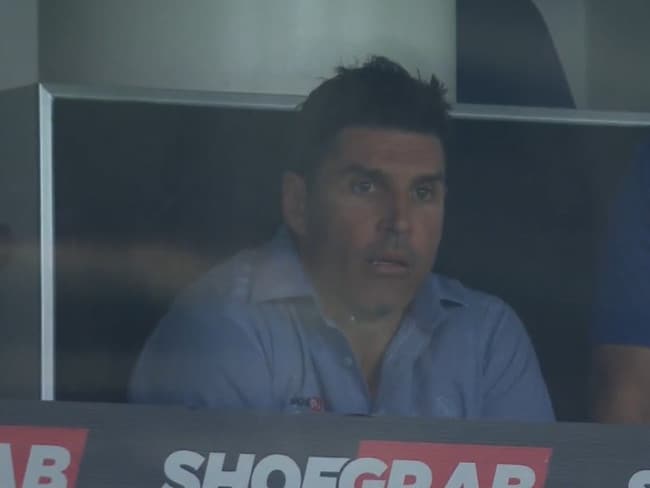 How Trent Barrett reacted to the tackle.Source:FOX SPORTS

After the game, Walker had no answers when asked why Lewis had tackled him to the turf.

“I wouldn’t have a clue,” Walker said with a laugh.

However, Walker may have had more of an idea than he first let on.

Lewis has played just four first grade games this season as well as five more in reserve grade, and Walker is believed to have hit him close to home.

The Daily Telegraph reported that several sources alleged Walker told the Bulldogs five-eighth to “go back to reserve grade”.

Lewis is off-contract at the end of the season and doesn’t have a deal for 2022.

Fox League reported that the pair came together after Walker was tackled to sent the teams to halftime, before he launched a spray at Lewis who was helping his teammates up.

Walking off the field, Lewis then tapped Walker on the bottom, before the Rabbitohs star said something else and the melee ensued. What was Lachlan Lewis thinking?Source:FOX SPORTS

Fans were left baffled by what had transpired.

I have no words. What just happened?? @[email protected]@FOXNRL#LachlanLewis

Reckon there might be a few Bulldogs fans googling how to take their name off a petition right now. Utter stupidity. #NRLSouthsBulldogs

WTF was Lachlan Lewis thinking ? He's a smart bloke but that was just bloody stupid Hey be belief @NRL_Bulldogs#NRL#NRLSouthsBulldogs

On Monday, Lewis was handed a $1600 fine by the NRL match review committee. If he fights and loses, he will be fined $2400 but will be free to play in the Bulldogs’ next game against the Sharks.