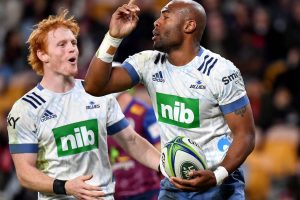 Four on the trot for the Blues. One step closer to the transtasman final.

After three maximum-point efforts to open this competition, the Blues’ tight four-tries-to-three victory was not enough to secure a precious bonus point at Suncorp Stadium.

For now at least, the Blues remain top of the table. The unbeaten Hurricanes can overtake the Blues on Saturday night with an unlikely bonus-point win in Canberra but with the Force at Eden Park next week, MacDonald’s men remain well placed to contest their first Super Rugby final since 2003.

Captain Patrick Tuipulotu led the dominance from the heavyweight Blues pack as they consistently overpowered the Reds to provide a platform that allowed in-form halfback Finlay Christie, Otere Black and Zarn Sullivan, through his prodigious left foot, to largely control the match.

Tuipulotu, in his continued comeback from a neck injury, delivered a dominant performance to score a try, feast on the Reds lineout and monster their ball carriers. Locking partner Gerard Cowley-Tuioti was another standout in an 80-minute performance; Tom Robinson’s workaholic efforts were again prominent, too, while Dalton Papalii continues to stake his case to replace injured All Blacks captain Sam Cane.

Such was the Blues’ dominance, MacDonald had the luxury of benching many of his stars for the final 15 minutes.

Two of the three Reds tries, it must be said, were dubious with Harry Wilson charging onto a forward pass and Brandon Paenga-Amosa crossing after the ball spilled out the side of a ruck.

Reds wing Filipo Daugunu scored late and then knocked over a penalty to bring the Reds within a converted try but after emptying the bench, the Blues had enough composure to close out the contest.

Defensively the Blues put a big focus on physicality and line speed in order to dominate the collisions. Their midfield rush was exposed on the edge a number of times in the first half but it paid off on many occasions too, with the Blues forwards pressuring their opposites into errors while attempting tip on passes at the line.

On attack the Blues displayed patience, particularly in the Reds’ 22 with Christie controlling the tempo and expertly picking his forward runners.

The Reds were dealt a major blow in the quest to back up their victory over the Chiefs last week with Wallabies playmaker James O’Connor ruled out late due to a neck injury. Bryce Hegarty was supposed to switch from fullback to fill O’Connor’s void at No 10 but he, too, succumbed to a hamstring complaint, thrusting Hamish Stewart into the driver’s seat.

While their handling let them down in the first half, with several forwards spilling the ball in contact, the Blues started with intent to pressure the Reds into mistakes.

The locals claimed the first try, however, through impressive No 8 Wilson after he benefited from a clear forward pass.

The Blues’ ball security was sloppy at times in that their cleanouts weren’t aggressive enough. Papalii, as he has all season, led the work in challenging opposition ball.

The turning point in the first half came when Reds hooker Paenga-Amosa was yellow carded for collapsing a daunting Blues maul as it rumbled towards the line. As has been a theme in this competition with a one-man advantage, the Blues seized their chance to strike.

In Paenga-Amosa’s absence the Blues scored tries through Papalii and recalled wing Mark Telea to savour a 17-7 buffer at the break but once restored to their full contingent, the Reds were well in the fight.

That statement proved true right until the finish in one of the more competitive transtasman matches but the Blues held firm to push towards a treasured finals appearance.