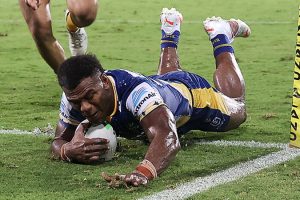 The Eels sweated through 32-degree temperatures and 80 per cent humidity, as well as the heat from a sex tape scandal, to record massive victory 46-6 against the Broncos in Darwin on Friday night.

A Maika Sivo hat-trick coupled with a huge effort from Bryce Cartwright in just his third game for the club saw the Eels score eight tries to claim victory at a sold out TIO Stadium. 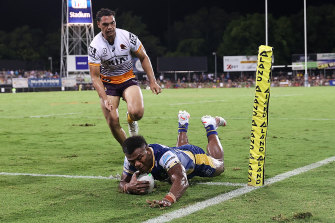 Sivo crosses for one of his three tries on Friday night.Credit:Getty

But the worry wasn’t required. Along with the efforts from Cartwright and Sivo, Isaiah Papali’i continued to prove himself one of the best buys of the season, taking a pass from Reed Mahoney to score the Eels’ third try.

The Broncos, who faced their own off-field dramas this week, didn’t help themselves and made a horror start. Xavier Coates dropped the ball from the kick-off and Maika Sivo crossed from the ensuing set in the second minute.

The only saving grace from the Broncos seemed to be Payne Hass, who ran for a team-high 165 metres. It was a massive effort from the prop, who is completing Ramadan and as such had abstained from drinking or eating during sunlight hours in the Darwin heat.

But it was Sivo who clocked the most of the night – sweating through 196 metres with the ball.

Broncos coach Kevin Walters, who is already facing a number of injuries with the squad, will be sweating on the news of Alex Glenn who was withdrawn from the team after the warm-up due to a calf injury.

Danny Levi had a less-than-ideal return with Walters announcing he would be promoting the hooker from the reserves this week for the rest of the season.

Levi’s first touch of the ball saw him lose it heading for the try line, and he then dragged a one-on-one strip forward to hand the Eels a chance close to their line. In the second half Levi again knocked on with a try begging.

The Broncos will likely be boosted by Karmichael Hunt who is expected to be added to the squad next week for their round eight clash against the Titans.