Home » Rugby League » Season over, Saints must not waste this crisis

Season over, Saints must not waste this crisis 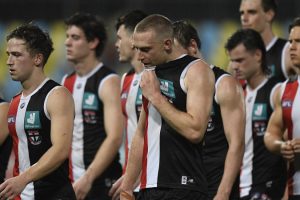 The sole silver lining from St Kilda’s capitulation to Adelaide in Cairns on Saturday night is that any baseless hope that the Saints could have made something of their cursed 2021 season will not extend another fortnight.

Much like Carlton a week earlier, St Kilda head to their bye having lost a game they should have won, and with their season now effectively a write-off if it hadn’t been already. 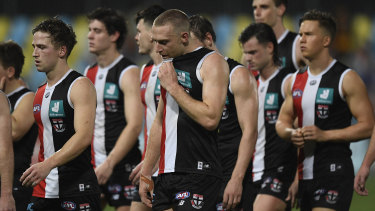 The Saints walk from the field after giving up a commanding lead against Adelaide.Credit:Getty Images

Within 48 hours of the Blues’ loss to West Coast at the SCG, Carlton had announced an external review of their football department.

The Saints showed their tendency to shy away from external help when the pin was pulled on a mooted remedial goalkicking session between Max King and Essendon great Matthew Lloyd last month. And it was Lloyd who used his Sunday Footy Show platform on Sunday to call for St Kilda to conduct their own review of a campaign that has spluttered along for months and was finally put of its misery with Riley Thilthorpe’s kick over his head in the tropics.

It needn’t have the grandeur of Carlton’s on-brand bells and whistles type review, but the Saints mustn’t wait a moment to forensically try to find out how they have fallen from losing semi-finalists to the bottom six and objectively worse than last year’s wooden-spooners.

Sources familiar with the situation indicated such questions are already being asked. There is an acknowledgment internally that the season is shot.

Any sober analysis of St Kilda’s season must take heed of their dreadful run with injuries, a run of outs that got worse with Hunter Clarks’ close-to-season-ending facial surgery on Sunday. But at Moorabbin, the lengthy list of unavailable players is being viewed as a reason for some of the drop-off, but not an excuse.

President Andrew Bassat’s letter to members contained at least a touch of revisionist history when he wrote that the Saints’ “genuine window” would more likely open in 2022 than 2021. A team that doesn’t think it is the window should not be bringing in injury-prone veterans like James Frawley and Shaun McKernan.

But they would not be the first club to overrate their list, and the key question is what comes next?

The maxim of never wasting a good crisis must be invoked.

On that note St Kilda need only look as far as Melbourne, who plummeted to 17th in 2019 before an off-season that landed Kozzy Pickett, Luke Jackson, Trent Rivers and Ed Landgon, pillars of their 2021 premiership push.

St Kilda’s list management strategy from here will be fascinating. Is 2021 the aberration or a true reflection on the state of their squad?

The Saints have said they won’t be trading away their first-round pick this year, and a byproduct of their impending lowly finish is that it should be well inside the top 10.

An almost unmitigated disaster to this point, Dan Hannebery is contracted on big money for another season while Bradley Hill has clearly underperformed relative to his salary.

The Saints must look at free agent Jack Billings and ponder seriously whether they would be better off with him or a compensation pick.

The other major area of concern is fitness. In addition to the long injury list, which can at least in part be attributed to bad luck, the Saints have faded out of too many games this year, Saturday night being the most glaring and recent example.

They have repeatedly been thrashed on the outside, an area that has become more important in 2021 because of rule changes.

There is very little to gain now from expediting player returns from injury. Youth must be prioritised now, and a player like Jack Bytel surely has to be given an extended run in the side.

St Kilda however remain a financial lightweight of the competition, and perhaps unlike Collingwood – who can afford to bottom out properly – the Saints need to also guard against the posterior of their season completing falling out, given the potential impact on the club’s bottom line.

Their next game after the bye is a prime time date with Richmond, an equation that turned nasty in April.