Home » Sea Eagles for a day: Roughy and Bob join the nest

Sea Eagles for a day: Roughy and Bob join the nest 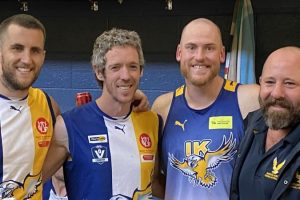 Of everyone in the mammoth crowd at the Inverloch footy ground on Saturday, no one wore a bigger smile than Cheryl Roughead.

For the first time in their lives, her sons Cam and Jarryd were playing a game of footy together.

The day was also a landmark occasion for the Inverloch-Kongwak (IK) footy and netball club, because not only was the four-time premiership-winning Hawthorn superstar donning their famous colours, so too was former Western Bulldogs captain and heart and soul figure, Bob Murphy. 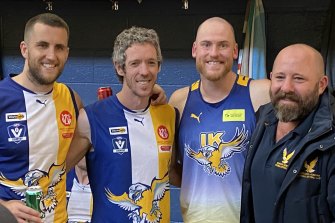 Authentic, full of heart, and with plenty of stories to tell – it’s little wonder both of them slotted in so seamlessly at their new footy home for a day.

Murphy donned a bright yellow IK tracksuit pre-game as part of a new Sea Eagles tradition after they uncovered a similar unsightly get-up worn by now club president Peter Butcher decades ago when he was a teenager.

Roughead, meanwhile, had to roll the dice in the pre-game for forgetting to bring his footy boots to a Sea Eagles training session. His punishment? Having to take a shirtless selfie and post it to social media.

“It was just nice to be part of a footy tribe again,”

IK has long been regarded as one of the great family footy and netball clubs of Gippsland, and the appearance of Murphy and Roughead in their famous colours only added to that. They bought in to everything.

The Sea Eagles’ faithful, and fascinated footy fans from all walks of life, packed out IK’s home ground as two of the AFL’s most beloved figures strode out to the middle with their new teammates to face Tooradin-Dalmore’s mighty Seagull flock.

This wasn’t a day about footy mercenaries collecting their appearance fees for bringing the crowds through the gates. This was about family and genuine mateship.

“It was just nice to be part of a footy tribe again,” Murphy said in the rooms after the game, which lived up to its billing with the Sea Eagles emerging victorious over a spirited Tooradin-Dalmore (featuring former Collingwood player Adam Oxley) by just two goals in their West Gippsland Football Netball Competition clash – 12.16 (88) to 11.10 (76).

“I was a bit of a scarecrow for most of it – just floating around and forgetting how to play, but it was just really nice to experience the sounds and the smells of footy again,” Murphy added. “But there’s a reason why I don’t play anymore. 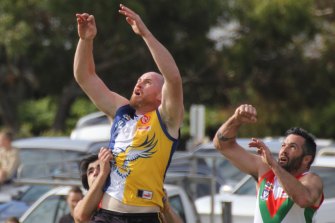 Jarryd Roughead soars for a mark in the Sea Eagles’ forward line.Credit:Russell Bennett

“Rough was here today to play with his brother, and I was here to play for Souma. It was nice for the two of us to get a photo together, but this was a bit more sincere than just that.”

IK coach, and one of the most revered figures anywhere in Gippsland footy, Ben ‘Souma’ Soumilas, remembers when he first met “this skinny little 14-year-old” who went on to become his brother-in-law.

“Rob (rather than Bob) and I have been very close friends all those years since because it only takes you a couple of minutes to realise what a wonderful man he is,” said Soumilas, who married Murphy’s elder sister, Bridget.

Roughead, like Murphy, has his own genuine connection to the Sea Eagles.

The 2013 Coleman medallist was worlds away from where he plied his trade on the MCG, where he captivated tens of thousands of ravenous Hawthorn tragics for well over a decade. But he obviously felt just as much at ease at the ground just off the South Gippsland coast.

This was a day a long time in the making – given it was originally planned for 2020, a season completely wiped out by the COVID pandemic.

Roughead wore the 35 guernsey – the same number he wore at the start of his Hawks journey. He tellingly slotted four goals playing deep forward and in the middle at stages, while Murphy – after starting up forward – moved down back and had his usual calming influence and set up some telling attacking plays. 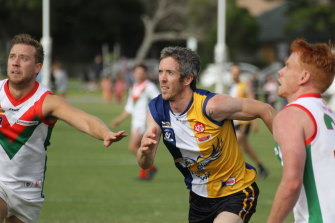 Bob Murphy was a calming influence, creating attacking forays from behind the ball.Credit:Russell Bennett

Murphy explained the history of him and ‘Roughy’ as teammates.

“We played International Rules together back in the day,” he recalled with a smile.
“It was really familiar today, having known him such a long time and playing against him a bunch of times as well.

“That was the most familiar part of today – at least I knew what was happening there. I knew he’d do his thing and kick a couple, and the rest of it felt like I was doing it for the first time but it’s great to experience this again… feeling sore in the rooms after, having a beer, and meeting some of the kids (who’ve come down to watch).”

Our Morning Edition newsletter is a curated guide to the most important and interesting stories, analysis and insights. Sign up here.