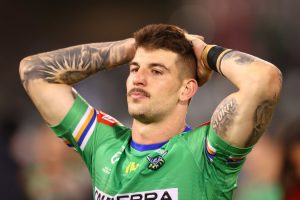 Curtis Scott’s legal team has lashed out at the NRL for refusing to allow the former Canberra centre to sign a contract with Parramatta ahead of his upcoming court date.

Scott will attend Sutherland Local Court on Wednesday after he was arrested last week and charged over domestic violence offences alleged to have occurred in 2018.

Scott’s lawyer Sam Macedone claimed on Tuesday his client had been offered a career lifeline with the Eels, but that it had been blocked by the NRL.

Scott was originally given permission to trial for a contract with the Eels, but the league ruled out registering a contract after the latest charges.

Macedone said a trial date may not be available until September, which would see Scott unable to play or train the entire 2022 NRL season.

“We will vigorously defending the charges on Wednesday,” Macedone said. “I am going to try and get [a hearing date] a lot earlier. Otherwise, he won’t be playing football this year until this gets sorted out, and he’s done nothing wrong.” 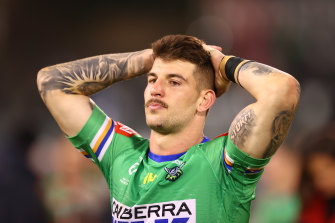 Curtis Scott’s legal team has lashed out at the NRL for refusing to allow the former Raiders to sign a contract with the Eels ahead of his upcoming court date.Credit:Getty

Scott has also been told he will not be permitted to train with the Eels. Without a contract, Scott will be forced to look for another job while the matter is resolved in court.

His manager, Sam Ayoub, also slammed the NRL for standing in the way of the contract.

Ayoub claimed the alleged victim approached the NRL in 2018 with stalking allegations against Scott in question, but said the governing body did not take action against Scott at the time.

The NRL said it did not act as the alleged victim did not want to make a formal complaint through the integrity unit at the time.

Ayoub said the NRL’s decision not to let Scott sign a contract with the Eels was frustrating given their lack of action in 2018. “We just have to let the process take its course,” Ayoub said.

Police will allege in court Scott assaulted a woman known to him on numerous occasions in 2018.

He was charged with two counts of intentionally choking a person, two counts of assault occasioning actual bodily harm, stalk or intimidate and three counts of common assault.

Meanwhile, Bulldogs general manager Phil Gould has denied Kyle Flanagan was being shopped around to other clubs following reports Canterbury were looking to offload the 23-year-old ahead of the 2022 season.

Adamant the former Rooster will be remaining at Canterbury for the time being, Gould was eager to set the record straight and said a decision on the youngsters starting position would come after trials.

With Bulldogs recruit Matt Burton and Jake Averillo set to start as the Bulldogs halves in 2022, Flanagan will likely be pushed to reserve grade for a majority of the season. He is contracted with the Bulldogs until the end of 2023.

“There has been no discussions with Kyle at all. He has never been offered to other clubs,” Gould said.