Canberra recruit Curtis Scott has been hit with a seventh charge by police in relation to his Moore Park arrest.

Scott's new lawyer Sam Macedone, who took over the case from Danny Eid, said the extra charge related to the way Scott allegedly "carried on after he was woken up". 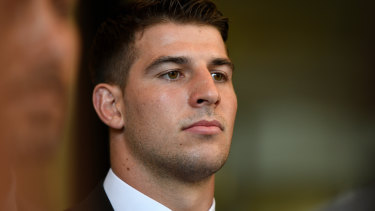 Curtis Scott’s new lawyer Sam Macedone, who has taken over the case from Danny Eid, said the new charge related to “the way he carried on after he was woken up”. Credit:AAP

"I don't know why it was added," Macedone told the Herald. "But I dare say it was added just before Danny Eid was replaced by me, so I can see where it sort of fits in with what the police are alleging. However, legally, whether it can be satisfied beyond reasonable doubt is something else."

Macedone said the police have also updated their version of events that occurred that night to include the new charge.

"The second statement includes the extra charge that has now been laid. Whether I agree with what's in those statements of facts as opposed to what I see in a video is another thing,"  Macedone said. "That's just the police version, the best guess of what they think happened. But what I look for is the evidence.

"Look at everyone's statements, look at what people say, look at any video images that are available, and then make up your mind as to what actually happened."

Macedone said he was contacted directly by Raiders chief executive Don Furner to take over the case after Scott parted ways with original lawyer Eid on Thursday.

"Look, I don't know why there was a move from Danny to myself. There's speculation around but I don't deal in speculation," Mr Macedone said. "It's just a matter of someone thought that I could do it. I think Danny's a very capable person. I have no problems with Danny and his ability and I think he would have done a great job, but somehow it's landed on my shoulders now. And I need to do a great job as well."

Scott was allegedly pepper-sprayed, Tasered and handcuffed after falling asleep under a tree at Moore Park after a drunken night out with friends at the Ivy nightclub. Police allege Mr Scott threw a mobile phone at a passing car in Paddington before assaulting two police officers on the Australia Day Weekend. Police were allegedly called to the scene by a security guard at the SCG.

Macedone said he mainly agreed with Eid entering not guilty pleas for each of the six original charges, but would be reviewing the charge against Scott of remaining on and enter Trust lands after a request to leave.

The defence case is set to rely heavily on four separate body-worn cameras by the four police officers involved in the incident, with CCTV footage from the SCG failing to capture the incident in full.

Scott is waiting for the NRL to rule on whether he will be stood down or allowed to play for the Raiders while his case is ongoing.

If stood down under the NRL's "no-fault" policy by chief executive Todd Greenberg, who reviewed the body-cam footage worn by police last week, Macedone will attempt to get Scott's hearing date expedited to before the NRL season start. Scott's next court date currently sits at March 20, a week after the Raiders first game.

"My main concern is to sort out Curtis's playing future and then deal with the legal matters at another time, if that's possible, or try and resolve it all together," Mr Macedone said.

"I have to talk with the integrity commission next and see what, what else needs to be done to get this matter resolved. I mean, the season is about to start. So we really want to put everything in place that we can."

As a condition of his bail, Mr Scott not allowed to consume alcohol or be intoxicated in a public place.