North Melbourne are set to appoint former Collingwood and Carlton midfielder Heath Scotland in a development role as they recast their football department under new coach Rhyce Shaw.

Shaw was a teammate of Scotland under Mick Malthouse at Collingwood between 2000-03, with the pair leaving the Magpies to further their careers. Scotland became a tough, dependable on-baller in 215 games with the Blues after playing in two losing grand finals at the Magpies. 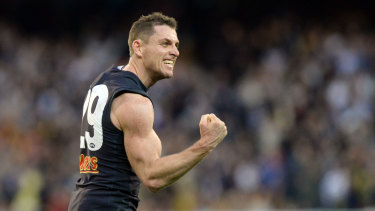 Heath Scotland, pictured here during his playing days for Carlton, is joining the Roos as development coach.Credit:Mal Fairclough

He played with Doncaster in the Eastern Football League after retiring from the AFL, before returning to coach his original club Darley in the Ballarat League, playing in a premiership in his first season with the club in 2017.

He coached Darley to victory in last week's elimination final in the Ballarat League.

Scotland is the latest appointment to the Kangaroos, who have new football manager Brady Rawlings starting in December after the national draft. They also appointed Jade Rawlings to the club as a senior assistant to Shaw, who replaced long-term coach Brad Scott as senior coach midway through the season.

The club is also set to part ways with list manager Michael McMahon, who has been at North for three seasons, at the end of the upcoming trade period. Former football manager Cameron Joyce and development coach Aaron Greaves left the club at the end of the season.

They are also in negotiations to retain All-Australian midfielder Shaun Higgins and All-Australian ruckman Todd Goldstein. Higgins is contracted until the end of 2020, while Goldstein is an unrestricted free agent.

The Kangaroos are also completing a club-wide review, commissioned when Scott left.