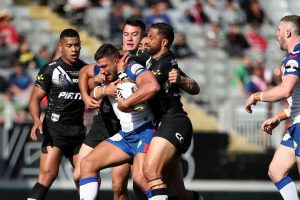 Ryan Hall has been backed to return to his prolific best with Hull KR – by Saturday’s Super League opponents Catalans.

The 33-year-old winger enjoyed 12 seasons of almost constant success at Leeds Rhinos, scoring 233 tries in 330 games. During the same period he touched down a record 35 times in 38 appearances for England.

But when Hall left to join Australian club Sydney Roosters, his luck changed. He sustained a devastating ACL injury three weeks after signing for the NRL giants, and later suffered a complicated dislocated knee issue. That limited him to just 11 appearances over the course of two seasons – and remarkably no tries despite playing in a free-scoring team.

Now Hall has been brought back to Super League to bolster Hull Kingston Rovers’ prospects after they finished bottom in 2020. And Dragons full-back Sam Tomkins – who also had two years Down Under – believes his England team-mate will quickly return to his destructive best.

Tomkins said: “He suffered a pretty bad injury while he was there and that probably stopped him doing the things that was expected of him. Ryan has been a top winger for over a decade now and there will be no surprises with what he’ll bring to the Hull KR team.

“He can finish a try but I think his main asset is starting the sets on plays one and two. He’s a massive bloke and fast with it, and it doesn’t matter how things went in the NRL for him – I’m sure we’ll see the Ryan Hall that we know from Leeds, he’ll be straight back this year.”

Hall was also coached extensively by Catalans’ former England boss Steve McNamara, who is fully aware of the winger’s ability. McNamara believes the quartet of NRL arrivals at the Robins – also including forwards Brad Takairangi, Albert Vete and Korbin Sims – will make then a much different proposition in 2021.

McNamara said: “Ryan was one of my favourite players to coach in the England group. He was just a dream, great to have around and performed well all of the time on the international stage.

“He’s a big human being and Hull KR have made no secret of the fact they wanted some more size and go forward. With Ryan plus Takairangi, Vete and Sims they’ve certainly done that.”

McNamara also believes the lack of relegation last year allowed Rovers to field youngsters who will be better players this season.

He added: “It was huge for Hull KR in terms of being able to continue with those young players and get them experience and improve them. They were able to give them that opportunity rather than being frightened to death of whether they should play them or not.”