Home » Rugby World Cup 2023: All Blacks to square off with France in blockbuster opening match

Rugby World Cup 2023: All Blacks to square off with France in blockbuster opening match 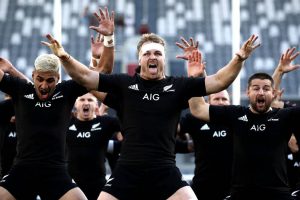 Three-time champion New Zealand and three-time runner-up France will square off in a blockbuster opening match of the 2023 Rugby World Cup.

The two nations have combined to deliver some of the most storied matches in the tournament’s history, including the 1987 and 2011 finals, both won by the All Blacks.

Host France and New Zealand will kick off the 10th edition on Friday, Sept. 8, 2023 at Paris’ Stade de France.

The national stadium sees two-time champion Australia playing the following day against a European side yet to be decided in Pool C. Ireland will open on the same Saturday in wine-growing Bordeaux, also against a European team in Pool B.

A blockbuster opening weekend features the 2019 finalists in action down south in Marseille. Defending champion South Africa will start its bid for a record fourth world title against Scotland in Pool B on Sept. 10, one day after beaten finalist England — the 2003 champion — takes on Argentina in Pool D at the 67,000-capacity Stade Velodrome.

Wales and flamboyant Fiji meet in Pool C on Sept. 10 in Bordeaux in what is usually a spectacular affair, full of feisty, attacking rugby. Their final group game at the 2019 World Cup in Japan ended in an incident packed 29-17 win for Wales.

The 20-team tournament has been expanded to eight weeks with player welfare in mind. An increased squad of 33 players, with at least five days between matches for all teams, will help recovery time and preparation.

Matches will be held in nine cities across France with each city hosting a minimum of four games. All matches will take place between Wednesday and Sunday to maximise fan attendance, organisers said, adding that ticketing details will be announced next Thursday.

“It has been developed with teams and fans at heart and we are confident it will provide the best possible platform for a thrilling, historic and very special Rugby World Cup,” World Rugby chairman Bill Beaumont said. “I know I speak for fans around the world when I say that 2023 cannot come fast enough.”

Vice chairman Bernard Laporte expressed his optimism that the tournament will capture the imagination of the public, like it did when France lost hosted it in 2007.

“It has everything: the world’s 20 best teams, 48 games and 51 days of celebration,” said Laporte, who coached France in 2007 and is now president of the French Rugby Federation. “This match schedule will delight all rugby lovers around the world. We have given each host city the opportunity to shine.”

The top two sides from each pool go through to the quarterfinals.

The pool phase for the 2023 tournament concludes with Six Nations rivals Scotland and Ireland meeting in Paris on Oct. 7 and fan-favourite Japan facing Argentina in Nantes on Oct. 8.

The 80,000-capacity Stade de France will host the final on Oct. 28, as well as the semifinals and the third-place playoff.

The New Zealand-France game in Pool A evokes memories of the dramatic 1999 semifinals and 2007 quarterfinals, both won by Les Tricolores.

However, New Zealand has never lost a pool match at a World Cup.

France should benefit from playing at home, and is on the rise with one of the most talented young squads in the international game.

Meanwhile, Australia is chasing its first crown since beating France in ’99.