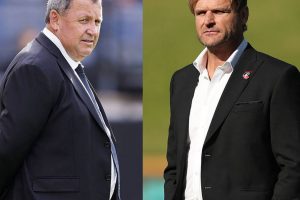 The All Blacks were barely in the sheds at halftime at the Stade de France and the Tweets starting tweeting. The gist being ‘Ian Foster out, Scott Robertson in’.

@JHC17626935 may not have a seat on the New Zealand Rugby board but it’s not just social media who should be asking the question – is Ian Foster the right man for the All Blacks job?

Two defeats at the back end of a long and Covid-hit season, coming after Foster re-signed as All Blacks head coach in August, won’t exactly inspire New Zealand fans two years out from a World Cup.

At some point next month Foster will do a review with the top brass at New Zealand Rugby, which happens at the end of every year. It’s at that point the call would be made to make a change or stick with the status quo.

New Zealand Rugby have a few options – stay with Foster, replace him with Robertson or bring in Robertson in some capacity either as head or an assistant coach.

Working in Foster’s favour is history, a gruelling 2021 schedule and, it appears, the support of the players.

Foster signed a contract extension through to the 2023 Rugby World Cup, where the All Blacks will open with a clash against hosts France. NZR don’t have a habit of firing a coach, in fact it’s never happened in the professional era.

The All Blacks have had to play 10 tests across 13 weeks with the two defeats by Ireland and France coming at the end of the gruelling schedule.

It’s not just that the All Blacks are losing, it’s how they are losing.

As the Herald’s Gregor Paul writes: Their gameplan looks confused – an erratic mix of buzzing about behind the gainline and then kicking poorly under pressure. They have become the Italian chef of world rugby – seemingly throwing various ploys at the wall hoping something sticks.

“They lost their heads at key moments, spent 40 minutes chasing shadows and dropping balls and lacked the innovation, speed and confidence of a French team that like Ireland before them, played an inspired 80 minutes.”

Foster’s winning percentage has dropped to 71.4 per cent following his fifth defeat in charge. With 21 tests under Foster, the All Blacks have 15 victories along with a draw. With today’s defeat he became the first All Blacks coach in the modern era to lose consecutive tests in his first two years on the job.

Foster’s re-signing in August left Robertson waiting in the wings for at least the next two years it appeared after he signed a three-year extension with the Crusaders that came with a clause enabling him to take the All Blacks job, should it become available.

The supporters of Robertson have a compelling case.

He has an impressive six Super Rugby titles under his belt with the Crusaders, but the major downside is he has no international experience. He was hoping to change that this year but Covid restrictions denied him the chance at a potential role with the British and Irish Lions.

International experience is obviously vital heading into a World Cup where the poolplay and knockout structure is a totally different beast to the longer Super Rugby format.

As much as the social media drums are banging, it would be unlikely that Robertson will be coaching the All Blacks in 2022, unless Foster steps down at his own accord.