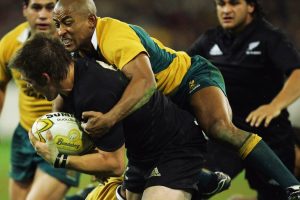 Wallabies great George Gregan has been accused of employing “charmless but chilling” tactics to force out a business partner ahead of a legal showdown between the two parties next week.

Gregan, 48, is being sued over allegations he was part of a secret coup to oust ex-business partner Alexander Goldberg from Sydney-based PTP Fitness.

He and retired Waratahs player Matt Dixon have been accused by Goldberg of wrongfully terminating his employment with the matter set to go to trial in the Federal Court on Tuesday.

The former rugby players have denied any impropriety and have launched a cross-claim against Goldberg, alleging he breached his statutory and fiduciary duties as head of the company.

Goldberg’s barrister, Robert Stitt, on Thursday told the court that both Gregan and Dixon had failed to comply with a discovery order when they redacted and deleted text messages.

“The respondents have given discovery of the WhatsApp and iMessage communications which have deletions and redactions and that were made deliberately by Mr Gregan and Mr Dixon,” Stitt told the court.

“It is more than a coincidence that these redactions and deletions occur on dates where Gregan and Dixon were plotting to remove Goldberg from the company.”

Stitt said his client was forced out after his former partners applied financial pressure on him.

“I give by way of examples … calling in his loan account, terminating his employment and hence his salary,” Stitt said.

“Declining to pay dividends, diluting his shareholding by capital raising and the charmless but chilling description of dropping the hammer on him.”

Stitt sought orders seeking that the unredacted messages be produced.

However, Justice John Halley noted that both Gregan and Dixon had made sworn affidavits explaining how and why their text messages were redacted and that it wasn’t possible.

“We can’t comply with an order that we unredact, so we ask rhetorically what orders Mr Stitt wants in this regard,” said barrister Robert Newlinds, who is acting for both Gregan and Dixon.

However, he said Dixon and Gregan could be cross-examined on the issue when the nine-day trial begins next Tuesday.

“It seems the suggestion of any abuse of process would go to Mr Dixon’s credit; it’s something you could potentially explore in cross-examination,” Justice Halley said.

“The swearing of affidavits and interlocutory applications doesn’t seem to be the most efficient way to get to the bottom of your concerns.”

Justice Halley did agree to read messages which had been redacted on the basis of legal professional privilege and rule on whether they should be handed over.

Gregan played 139tests for the Wallabies before retiring in 2007 and was inducted into the World Rugby Hall of Fame in 2013.