Rugby: All Blacks comeback not enough as France record famous win in Paris 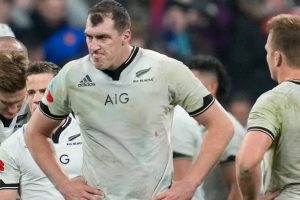 A second half comeback could not prevent the All Blacks slumping to their worst season in 12 years after falling to successive defeats to finish the year in Paris.

One week on from the deflating defeat in Dublin the All Blacks were again upstaged, this time by the inspired French, to consign Ian Foster’s men to three losses in a season for the first time since 2009.

While the All Blacks mounted a second half comeback, scoring three tries, the damage was done in the first spell when they were shellshocked in front of 79,000 at the Stade de France, trailing 24-6 at the break in their largest halftime margin in history.

The wolves are sure to be howling after the All Blacks lost the Dave Gallaher trophy and suffered their first defeat in Paris since 1973. This was another humbling result after the three-month odyssey that’s seen the All Blacks traverse six countries in a restrictive covid bubble.

The All Blacks displayed heart to close within two points heading into the final quarter but a yellow card to Ardie Savea helped the French storm home to a treasured victory – their first against the All Blacks in 15 attempts – that will fuel their young side’s confidence ahead a rematch in the opening match of the 2023 World Cup.

France’s captivating performance was characterised by Romain Ntamack’s stunning counter attack from his own in goal where he beat Richie Mo’unga and Jordie Barrett to spark a breakout stopped only by desperate defence and finished with Savea’s yellow card.

Led by Anton du Pont and Ntamack, France were superb. As is the blueprint they dominated the All Blacks physically, at the breakdown and brought defensive heat to regularly pressure key playmakers.

Replacement hooker Samisoni Taukei’aho injected huge impact off the bench in the second half to help lead the comeback as the All Blacks claimed tries through Barrett, Rieko Ioane and Ardie Savea but, by the finish, the All Blacks were comprehensively beaten for a second week in a row.

The flaws France exposed have been exploited too often this season, leaving major concerns surrounding the All Blacks’ ability to problem solve week to week.

Nerves were evident from the outset as Aaron Smith missed touch and Barrett handed France a lineout five metres out from the All Blacks line with a bizarre kick.

On the backfoot, the All Blacks could not stop the rot.

Defensively the All Blacks were left scrambling. Du Pont picked runners flying off him at the base to punch holes around the fringes. France used the pick and go to good effect; they varied their attack by using the width and employing the boot.

With the ball the All Blacks struggled to generate go forward through their ball carriers which left them playing behind the advantage line. Seemingly bewildered, the All Blacks often resorted to aimless kicking or shovelling passes to team-mates in worse positions.

Despite lacking punch the All Blacks applied pressure at the lineout and scrums to create chances in the first spell, but execution let them down.

Will Jordan and Rieko Ioane threatened but their busts weren’t finished. George Bridge dropped one Barrett cross-field kick and just before halftime, down by 18 points, Sam Whitelock turned down the shot at goal. From the lineout the All Blacks worked a set move round the front, only for Dane Coels to lose the ball metres short.

Seven turnovers from the All Blacks in the first half – many of those unforced errors – gifted France possession and they were lethal on the counter.

A change in approach in the second spell brought immediate rewards as the All Blacks took the direct route, going up the middle through the heart of the French defence to provide the desired platform for the first time in the match.

After several quick-fire carries, Aaron Smith sent Barrett in at the corner to finally halt the onslaught.

From turnover ball the All Blacks struck again with Ioane showing the ball in two hands and showcasing his pace to close within six points.A third try to Savea suggested the All Blacks could run France down but it was the locals who regained composure.

Falling to a 12-3 season is not nearly good enough from an All Blacks perspective. Expect the fallout and soul searching to stretch long into the summer.