Richmond didn't need arguably the AFL's best defender, Alex Rance, to win the 2019 flag. Nor did their grand final debutant, Marlion Pickett, need an AFL pre-season to sparkle in that decisive finale.

So on Monday when the pair ran out for day one of Richmond's pre-season it was effectively like the Tigers had two new recruits, Rance back from a knee reconstruction that restricted him to one game in 2019 and Pickett facing the possibilities of what a full pre-season might help him achieve. 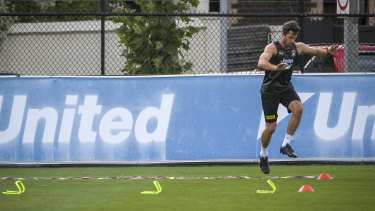 Alex Rance is put through his paces on Monday. Credit:Eddie Jim

"[You] always have to hold back Rancey," Tigers captain Trent Cotchin said before training. "We're excited. Some of the commentary around the draft … and we get a new draft pick in Alex Rance next year which is really exciting for our footy club.

"His mountain of work he did not just on the field, particularly with our VFL program last year, that's going to be amazing for us and his development this season. He's as fit as ever, he had a little tidy up [operation] but ready to go.

"We meet the young boys that have been drafted last week and see what they've got in store for us. Apparently they're all good runners which is no benefit to me because it puts me further to the back of the group." 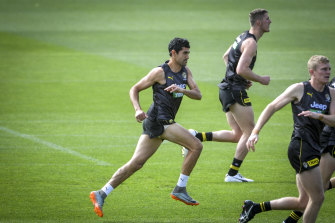 Those draftees – Thomson Dow, Noah Cumberland, Will Martyn, Hugo Ralphsmith and Bigoa Nyuon – joined Rance and Pickett and most of the Richmond list at Punt Road Oval on Monday.

The only notable absentees were Sydney Stack (who was at a funeral) and Jack Higgins, who continues to recover from a brain bleed. Ruckman Toby Nankervis, who had groin surgery in the off season, was on very light duties while Dylan Grimes, Dion Prestia, Jack Graham, Nick Vlastuin and Bachar Houli also trained seperately from the main group.

Dustin Martin participated in full training, with Cotchin confirming the star midfielder had in fact picked up his car from the MCG, having left it parked there after the grand final.

Cotchin added that the group was having no problems getting motivated for a tilt at back-to-back premierships in what would be their fourth consecutive season at the pointy end of the ladder.

"The reality is that the less you focus on what's happened and what might happen the better. And you just focus on the now," Cotchin said. 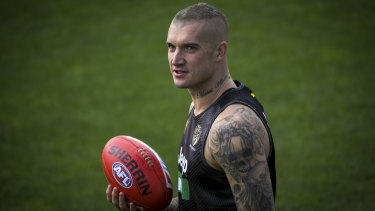 Dustin Martin has picked his car up from the MCG, according to Trent Cotchin. Credit:Eddie Jim

"You can look at it from two different aspects … 'rest on your successes' or you can be motivated by the experience that you've had and I know the group we have here at this footy club are really hungry."

Richmond chief executive Brendon Gale was also on hand to announce the Tigers had made a $300,000 donation the Alannah & Madeline Foundation.

It means Richmond have donated more than $1 million to the foundation in their seven year partnership.

"It's a significant amount of money, but more importantly, it's money that will be very, very well spent by the Alannah & Madeline Foundation to protect children from violence and bullying," Gale said.