Richmond hire from within to fill AFLW coaching role

Richmond have followed North Melbourne and West Coast in handing their AFLW coaching role to a coach from their AFL program, appointing Ryan Ferguson for the 2021 season.

Ferguson was this year part of the Tigers' AFL coaching structure as development coach and VFL backline coach (before that season was cancelled). Ferguson did not spend any time in the hub but helped out while players remained in Victoria. 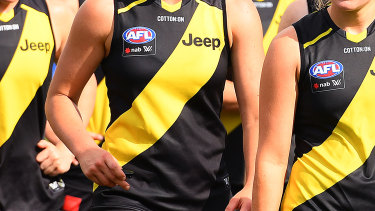 The former Melbourne player replaces Tom Hunter who was sacked in May after Richmond’s first season in the AFLW, which was a winless campaign.

"I am thrilled to accept this opportunity. I have taken a keen interest in this program over the years, so it is familiar to me and I am really excited to join the team," Ferguson said.

"It is exciting to have the opportunity to coach this particular group and there are so many great people in the program already."

His wife, winter Olympian Bree Munro, has worked with Richmond's AFLW players in the past.

"The girls have put in a power of work already and as a program, we look forward to helping them continue on the journey," he said.

"He has fantastic relationships with the AFL program and its players and staff. We are excited about the connections to be built between the two programs moving forward," she said.

"Our players will greatly benefit by having a coach of his calibre with a proven track record of developing players. We love his passion and energy and commitment to improvement and feel he is the perfect person to take this group forward."

Ferguson has been a coach at the Tigers since 2015. The 39-year-old played 47 games for the Demons in the AFL and then captained West Adelaide in the SANFL, winning three club best and fairests. He is also a qualified school teacher.

He will take his first pre-season session on Monday.

Richmond will not run its own VFLW program in 2021. The competition will run concurrently with the AFLW because of the pandemic, and the Tigers will have a VFLW partnership with Port Melbourne.

In October the Kangaroos appointed Darren Crocker as their AFLW coach. He will split his time as men's pro scout and AFLW coach given the club sacked Scott Gowans in June.

The Eagles appointed Daniel Pratt as their AFLW coach in October. He had been an AFL assistant at the Eagles since 2014, and replaces Luke Dwyer who opted to take a different career path following the 2020 season.