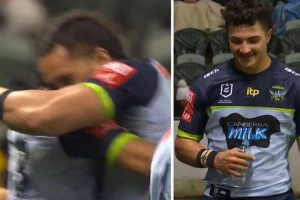 19-year-old Canberra Raiders winger Xavier Savage came on at halftime but his debut has lasted just 11 minutes and ended in bizarre circumstances.

With a minute remaining in the first half, the Raiders’ Sebastian Kris came off the field after an accidental poke in the eye, with the Raiders opening a 14-6 lead at the halftime break.

But while it was bad news about the injury, it looked to have activated the 18th man, with Savage coming on for his NRL debut.

His teammates hit him with a flurry of hugs as he ran onto the field with a giant smile on his face.

“These are great scenes,” Corey Parker said on Fox League.

“Look at his teammates run from a long way away to congratulate the young man. Welcome to first grade, welcome to the big smoke.

“They’re terrific scenes, a lot of those players came from the far side of the field to congratulate him.”

Savage was swamped by his teammates.Source:FOX SPORTS

It lasted just 11 minutes however, before he was ripped off the field after one run for 11m and a pass.

While his debut ended prematurely, no one could wipe the smile off the young man’s face.

Fox League sideline reporter Jake Duke said it was an accident from the NRL’s sideline officials.

“Sebastian Kris was ruled out with a HIA but Xavier Savage should not have been allowed to come on as Jack Bird was not sin binned for that high contact on Sebastian Kris,” he explained.

“There’s the mistake, so they’ve had to pull off Xavier Savage.”

Couldn’t wipe the smile off the kid’s face.Source:FOX SPORTS

Dan Ginnane added: “Look at the smile on the young man’s face. He’s had a taste of first grade, he shouldn’t have – what a debacle.”

The main crux of the issue is whether it was the NRL officials’ fault, because otherwise “Canberra have done nothing wrong here”.

Corey Parker added: “He was stoked by those 11 and a half minutes, he had a nice carry and a wonderful kick chase as well.”

Dramas at WIN Stadium. Xavier Savage activated as 18th man by Raiders, but there have not been three failed HIAs or a player sin-binned. #NRLDragonsRaiders

Xavier Savage debuting as 18th man for @RaidersCanberra, but NRL types trying to work out if kid should have actually taken field. Who knows. We’ll find out soon …

The news gets better for @RaidersCanberra ‘cameo kid’ Xavier Savage. He’s one of a few seriously talented up and comers to extend their futures at the club. Announcement next week. @telegraph_sport

Savage's Raiders debut halted – he shouldn't have been allowed on as Kris came off following an offence that was put on report, but not a sin bin or send off… #nrldragonsraiders

The NRL released a statement after the game that it could be the Raiders’ issue, meaning they could be penalised for the blunder.

“The rules are clear that an 18th man can only be activated if a player is sin-binned or sent off – or a team has three failed HIAs,” an NRL spokesperson said.

“The Raiders incorrectly activated the 18th man at the beginning of the second half.

“The NRL has asked for full reports from the Raiders as well as our staff on duty at the ground to ascertain the circumstances which led to the 18th man being incorrectly activated.”

The Raiders ended up coughing up the 14-6 lead at the break to lose 22-20 in a back and forth result which was heavily affected by wind.

It continues the Raiders’ horror trend of second half capitulations in 2021, while the Dragons inconsistency was again exposed.