Penrith and NSW wunderkind Nathan Cleary has a weakness and the Maroons have identified it. Cleary’s below-par performances in the NRL grand final and the first State of Origin match are directly related to the pressure both the Storm and Queensland imposed on his kicking game.

If Cleary is rushed with his kicks and they fail to achieve desired distance or direction, he retreats within himself. He doesn’t run the ball, or follow the play. 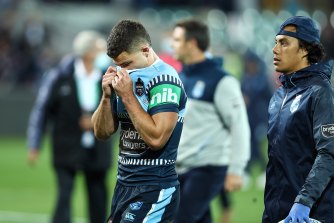 Queensland have the two best props throughout the NRL season in their team: the Storm’s Christian Welch and Canberra’s Josh Papalii.

They divided their responsibilities admirably, Papalii propelling the ball forward and Welch leading the defensive line. It was Welch’s relentless pressure on NSW that led to a dropped ball by Blues winger Daniel Tupou and Queensland’s second try.

The Storm’s intelligence about Cleary would have been passed on to Maroons coach Wayne Bennett.

“Old Man Winner” is not so arrogant as to ignore a tip from a player. The Storm’s Welch, Cameron Munster, or Felise Kaufusi would have volunteered, in camp, Melbourne’s successful tactics against Cleary. Even if the Skinny Coach didn’t highlight it on the whiteboard, Welch certainly reprised his grand final role. 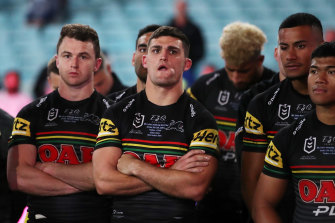 The Origin fizzer came just weeks after Nathan Cleary blamed himself for the Panthers’ grand final loss to Melbourne.Credit:Getty Images

The Skinny Coach’s mentor was Ron Massey who, in turn, was Jack Gibson’s eyes and ears. One Massey saying was “always take the two.”

Massey believed that any penalty awarded within kicking distance of the posts must be taken, unless the clock and scoreboard mandates a try.

However, the six-again rule has changed the importance of penalty goals. 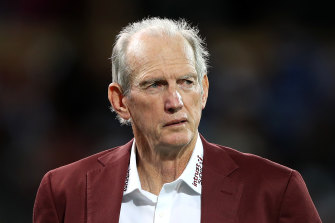 They are not as enticing now, with attacking teams seizing the opportunity to score a try against a fatigued defence.

(Parramatta’s finals campaign ended when the Eels elected to take a shot at goal which would have levelled the score at 20-20. A try would have put them ahead but the ball bounced infield off the upright. Bennett’s Rabbitohs scored and won 38-24.)

But this mad moment has not deterred the Skinny Coach from maintaining faith in the Massey dictum.

Queensland captain Daly Cherry-Evans, rather than use a penalty to attack the NSW line, elected to take a shot at goal which fell short and allowed NSW to run the ball back.

Maybe the Skinny Coach calculated the referee would not blow as many six-agains as he did in the grand final.

Gerard Sutton blew seven ruck infringements in the grand final and four in the Origin match, including none in the second half, meaning goals became critical in Adelaide.

While the Adelaide score was Queensland 18 NSW 14, the average score in the finals was 28-23.

In terms of the quality of Origin matches, the Adelaide encounter was also below par. This is understandable given it was played at the end of the season with many inexperienced players chosen.

With only a seven-day break, it could be the same in Sydney.

NSW appeared to be waiting for something to happen, almost as if Cleary and Luke Keary needed a six-again call to score a try.

Queensland were happy to score tries within the existing set, seizing opportunities as they presented themselves.'

Munster’s wind-up kicking style resembles a rusty windmill trying to start, yet his performance with the boot in Adelaide was his best ever, allowed time to achieve direction and distance.

Compared to the harassment of Cleary, that tells us a lot about the relative pressure imposed by the defence.

The Blues need an attitude change and a realisation that, with Cleary, precocious success often precedes premature responsibility.