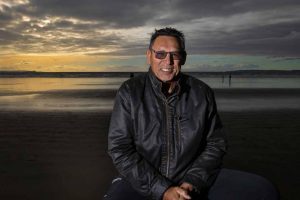 All Black great Wayne Shelford is today one of eight new knights and dames in the Queen’s Birthday honours list. He speaks to Liam Napier about the new honour, his life in rugby and being unceremoniously dropped – and the new challenge he’s facing in helping others with their mental and physical wellbeing. See the full list of honours here.

Most people associate Wayne “Buck” Shelford’s story with his many great feats for the All Blacks.

There’s the infamous scrotum injury he played on with in France, his influence injecting mana into the haka, his record-setting three-year unbeaten run as national captain and subsequent sudden axing from the team.

But while those achievements evoke pride, Shelford speaks more passionately for other causes these days, particularly those around mental and physical health.

So, today he’s gratefully accepting an unexpected Knighthood for the impact the title will have in uplifting the many deserving causes he seeks to serve since retiring from rugby.

“It’s a great accolade; a great honour. It’s one of those things you never think will happen – I’d never thought about it before,” Shelford said. “I’ll wear it with pride for the family and all the organisations I work with. They’ll carry that with them because they’re my biggest supporters.”

In a rugby context Shelford will always be a legend among men. In an old-school era where head knocks and punches often went undetected, Shelford stood tall as a gladiator.

It’s those on-field feats that have ultimately provided the platform to speak for causes of more importance to today’s communities; those including prostate cancer, child cancer, mental health and suicide awareness.

Having served 11-and-a-half years in the military Shelford remains a patron of the NZ Defence Force and Navy rugby teams, while supporting the Auckland RSA.

The 63-year-old is, in many ways, living proof hard men can and must tackle hard issues.

“We have a lot of problems out there in modern-day society with a lot of people spiralling down with their anxiety and depression and that’s driving people to whakamomori [suicide],” Shelford said.

“We lost 654 people last year. That’s an indictment on how life is today that people are taking their own lines. Education is a big part of it – that’s what Mike King is trying to do.

“I speak not so much about mental but physical wellbeing. It’s about educating people to look after their bodies a lot better, and going to the doctors on a more regular basis.”

Shelford says men especially don’t like seeking help when something is wrong with their body or mind.

“I’ve had a lot of people come up to me after I speak a year or so later and say I inspired them to go to the doctor. I know one guy who went and he was diagnosed with prostate cancer straight away.

He said ‘you saved my life because I wouldn’t have gone otherwise’. Those are the things that inspire you to keep doing it.

Despite being dropped from the All Blacks in 1990 in a decision that sparked widespread controversy, Shelford holds many fond rugby memories.

He cites his son Eruera’s birth the same week he first made the All Blacks in 1985 as a late-blooming 27-year-old from the emerging players tour alongside Victor Simpson and Steve McDowell.

Claiming the 1987 World Cup on home soil, as a domineering No 8, stands out for several reasons too.

“By winning that we brought New Zealand rugby back together again after the New Zealand Cavaliers split the country down the middle. To win the first ever World Cup in New Zealand was fantastic.”

Thrashing France 29-9 at in the World Cup final at Eden Park was sweet revenge for Shelford as the Battle of Nantes, where he tore his scrotum, had it stitched up and returned to the field only to be knocked out, was the only time he lost in 22 tests for the All Blacks.

“Everyone talks about the Nantes game but it was still a game we lost irrespective of all the injuries I got that day. When the All Blacks lose a game, it doesn’t matter who it’s against, you lose a bit of your mana. It’s like it’s been taken away from you.

“The World Cup in 1987 was restitution for that. By beating France, we threw that off our shoulders and for the next four years we were unbeaten which was a proud time in my career, that’s for sure.”

Assuming the captaincy following the World Cup from David Kirk, who left for Oxford University, Shelford led the All Blacks to 14 unbeaten tests from 1987-1990 before Alex “Grizz” Wyllie axed him, sparking the “Bring Back Buck” campaign.

“Grizz and I have talked about it. I think Grizz realises he made a huge mistake – he told me if he had his time again, he wouldn’t have done it.”

A passionate Te Reo Māori speaker, Shelford’s profound influence in elevating haka to a source of pride within the All Blacks is another testament to his legacy. Thanks to Shelford, no more is haka a half-hearted, unconnected pre-match tradition.

“I’d watched a lot of haka being done pre my time and they didn’t do it that well. They played it rather than training and learning the tikanga properly.

“All of a sudden we created a tsunami where we had something with a lot of power. Many years later the All Blacks, New Zealand Māori have their own haka; the under 20s, Super and provincial teams had haka. All the schoolboy teams like getting haka written for them. It’s great for our people; our iwi of New Zealand to have these haka written in their rohe and it’s about where they come from. It’s powerful for Maori to see their haka on TV.”

As for the future of New Zealand rugby Shelford laments the disenfranchised, downtrodden grassroots game, suggesting major evolution is needed to revive the sport at community level.

“There needs to be a lot of change in the way the NZRU structures the game in New Zealand.

“It’s always the clubs that suffer. There needs to be a rejuvenation of club football – I can’t see the provinces functioning any better with an injection of money from the Silver Lake deal or whatever they do get. They’ll burn through that money pretty quickly because they’re trying to find $1.2 million every year for player salaries for 10 games a year and that’s not sustainable.

“Everyone is so competitive nowadays we’ve forgotten how to enjoy ourselves.”

Just as his physical presence left its mark on the field, Sir Buck’s opinion and influence will always carry weight.