Richmond coach Damien Hardwick declared Optus Stadium would be an ideal AFL grand final venue should the showcase event have to be shifted from the MCG, on a night his side booted the final seven goals in a 39-pint win over Essendon.

In an intriguing Dreamtime contest transferred from Melbourne because of the latest lockdown, the Tigers led by 30 points in the third term, only for the Bombers to surge and take a three-point advantage after booting four goals to start the final term. But the Tigers responded with the final seven goals of the clash, to post their 11th-straight win over the Bombers. 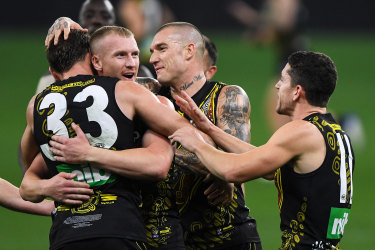 More than 55,000 attended the annual clash, and Hardwick said Perth would be an ideal venue to host the grand final should the MCG be unavailable as a result of the fall-out of the coronavirus pandemic. The Tigers won last year’s pandemic-impacted premiership in Brisbane.

“It is one of the best stadiums in the country, absolutely,” Hardwick said when asked if Optus Stadium was a “worthy” alternative

“The crowds for what we have here are absolutely phenomenal. The Tiger army, we are very fortunate they follow us near and far.”

Having survived the Bombers’ comeback, Hardwick lamented failing to warn his side about the possibility of a late surge.

“Unfortunately, it was, not an error on my behalf, but we knew Essendon would push hard forward at three-quarter time into the last quarter. I forgot to mention that to the players and it probably caught us a bit off guard a little bit with regard to our preparation and defensive set up,” he said.

“I was a little bit disappointed with myself but the players got it together by the end and we managed to get the result.”

The win gave the Tigers back-to-back wins for the first time since round two and has lifted them into seventh spot on the ladder.

Dustin Martin was superb with 27 disposals, including three goals, the last a long bomb in the final term which steadied his side, while Shai Bolton delivered two crucial goals in the final term. The rugged Jack Graham and back-up ruckman Mabior Chol were also important. 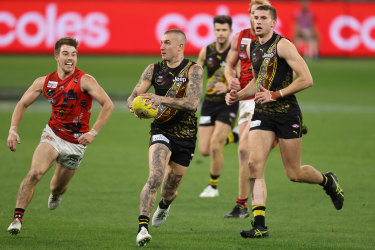 The Bombers’ Dustin Martin in action.Credit:

However, the victory came at a cost, with midfielder Dion Prestia subbed out in the final term with hamstring tightness. Prestia had 26 disposals and now faces another stint on the sidelines, having been restricted to only five matches this season because of injury.

“He has had some hamstring tightness … he will obviously be doubtful for next week,” Hardwick said.

The Tigers will now return to their base in Sydney for another week because of Melbourne’s lockdown, and then head back to Perth for next Sunday’s clash against the West Coast Eagles. The Tigers were due to have their mid-season bye next weekend but have agreed to a fixture change, with Hardwick insisting his side enjoyed being on the road.

The Bombers, having launched a successful come-from-behind win over the Eagles last weekend, were unable to repeat those heroics.

“I don’t think the scoreboard, in the end, completely reflected the game. I thought for the game, Richmond were the better team. Any time they forced a mistake, they were able to punish us on the scoreboard,” Rutten said.

“We need to get better traction with our attack. I thought we created a lot of opportunities, we are just not good enough at the moment to be able to finish them off.”

The Bombers were not helped by a suspected PCL injury to hard-running midfielder Andrew McGrath in the first term.

“He has hurt his knee, so not sure the extent of that yet,” Rutten said.

David Zaharakis had hamstring tightness in the final quarter, which left the Bombers with three men on the bench.

Darcy Parish, off contract this season, was magnificent. In a season where he has thrived since being shifted permanently into the midfield, he had a club record 44 disposals, breaking Barry Davis’ record of 43, in 1969.

“His form over the last six or seven weeks has been really good,” Rutten said.

“He was really clean, value for his possession is getting better and better. It was a fantastic game, especially when McGrath went down, Darc’s ability to stand up – he played a really important role for us.”

Parish has had at least 35 disposals in his past five matches.

Rutten said he was “pretty pleased” with his team’s rebuild so far this season, having had five wins heading into this week’s bye. The Bombers remain in touch with the top eight.