Home » ‘People can judge him but we know what we value’: Hardwick defends Lynch

‘People can judge him but we know what we value’: Hardwick defends Lynch

Richmond coach Damien Hardwick has launched a spirited defence of his key attacking target Tom Lynch, amid criticism of his output and pay packet following the Tigers’ muted start to the 2021 season.

Lynch has kicked 10 goals in the first six games where Richmond have won three and lost three, with the undefeated Western Bulldogs their next challenge on Friday night. 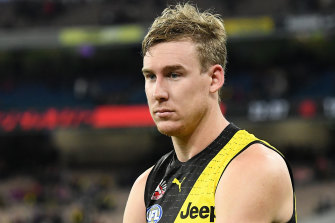 Tom Lynch has been criticised for limited output in Richmond’s luke-warm start to 2021.Credit:Getty Images

The former Gold Coast Suns player signed for Richmond on a back-loaded seven-year deal worth close to six-and-a-half million dollars.

“Tom could go to another club and be more dynamic as a player, there is no doubt,” Hardwick said on Wednesday. “He comes to our club and he fulfils a role. What we determine that role is, allows us to win games of footy.

“There is no doubt he could play in a different format, a different system and get All-Australian honours. But the reality is he comes in and he is happy to fulfil this role, he gets two premiership medals as a result of that.

“People can judge him … but we know what we value as a player. Jack Riewoldt is the same. We are a system-based side and he plays according to our system. Now people want him to kick 60 goals, 80 goals, that’s not going to happen. We have been down that road as a Richmond footy club and we finished ninth. To use a pun.

“But the fact of the matter is Tom and Jack play very specific roles in our system that allow us to win a lot of games of footy.

“Now, can they play better at various stages – yep, like every other player in the league. But the fact of the matter is Tom is a very valued player in our system and what we choose to pay that player is what we think he is worth. End of story.”

Hardwick revealed that the club’s No.20 pick in the 2018 draft, Riley Collier-Dawkins, would finally make his debut on Friday night.

“We always knew when we drafted him it was going to be a bit of a slow burn and he had to work on some things in his game,” Hardwick said of the midfielder.

“He is incredible around the ball. We had to work on his off-ball positioning and understanding how to go about getting that off-ball offensively. He has worked incredibly hard on that.

“It is going to be a well-earned debut.”

The coach also said defender Dylan Grimes was likely to face the Bulldogs despite an injury, while Dustin Martin – who is returning home to see his father in New Zealand – was feeling good after his concussion. He has to miss at least one game due to the AFL’s concussion protocols.

“We have got to do a lot of things better. We left a lot of opportunities on the table last week. We had 60 entries against the second best side in the comp. We just didn’t use the ball well enough.

“We always look at a loss as a gift.”