Patton a no-show at training, more women allege they were sent lewd messages 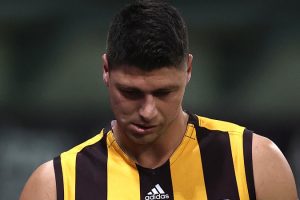 Hawthorn forward Jonathon Patton was a no-show at Hawks training on Monday, the morning after three more women spoke publicly about alleged inappropriate sexual conduct by the 2011 No.1 draft pick.

Patton is under investigation by the Hawks' integrity committee after it emerged on Saturday that a woman had made claims about his behaviour toward her on social media. 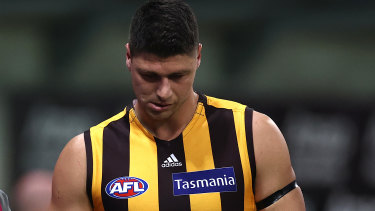 Jonathon Patton has had more women make allegations against him. Credit:Getty Images

Following that revelation, Elle Conan told Channel Nine that she too had allegedly received inappropriate messaged from the former GWS player.

"Basically from the get-go he just talked to me in such a sexual nature that I never reciprocated," Conan said.

"He would send me photos of him in bed, like [with his body] exposed.

"I was making it really clear that I didn’t want that from him."

"He just needs to be made an example of … unfortunately it is not something that is uncommon but it makes you feel uncomfortable."

A third woman, who remained anonymous, made similar allegations to News Corp. Patton has deleted his social media accounts.

The AFL and Hawthorn have been contacted for comment while Patton's manager said media requests about the player's predicament would be handled by the club.

Hawthorn said on Saturday it was aware of the initial allegation toward Patton.

"The allegations are of behaviour that does not reflect the values and standards of Hawthorn Football Club," the Hawks statement read.

"As soon as the club became aware of the allegations it addressed the matter with Patton directly and clearly communicated that any behaviour of this nature would not be tolerated.

"The club takes these allegations seriously and has referred the matter to Hawthorn’s Integrity Committee.

"Hawthorn advocates for equality and respect for everyone and demands this same behaviour from all involved with the club."