Patrick McKendry: What Covid complications mean for All Blacks 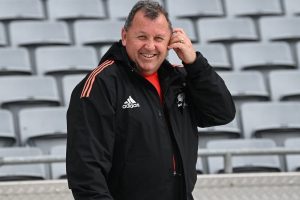 There was a moment very late in the recent Bledisloe Cup test at Eden Park when Wallabies captain Michael Hooper, a relentless trier – whether it’s getting back to make tackles in lost causes or attempting to change a referee’s mind (often with similar success rates) – looked and sounded utterly defeated.

It happened well after the 80 minutes were up, a frantic period when neither side appeared to want the test to finish. The score was 50-22 to the All Blacks. The Wallabies clearly wanted to finish something approaching a humiliation on a high note. The All Blacks, seven tries to the good and the big old cup retained for the 19th consecutive year, were having too much fun to end it.

Andrew Kellaway, the Wallabies wing who wondered during the week whether the All Blacks’ aura had gone, had dropped a Noah Lolesio pass cold. The ball was scooped up by wing Will Jordan who went searching for a gap that wasn’t quite there in the knowledge that if he held the ball for long enough some support might appear.

It did in the form of David Havili, Jordan popping the ball up for the midfielder to go in for an inevitable try. Normally, the indefatigable Hooper would have been on his heels but unfortunately for him and the Wallabies the skipper had run fully into the large form of Akira Ioane, the All Blacks blindside who stood his ground, as he was allowed to.

It was the body language that told the story – Ioane, as hard to move as a refrigerator, taking the contact easily and then pushing Hooper, whose head had dropped, away. But the sound was picked up by Sky Sport’s sideline effects microphone: there was a loud “oof”, and Hooper, beaten at the last, began slowly walking back to his tryline.

The question for Ian Foster and his fellow selectors now is how to balance their desire to keep the All Blacks’ metaphorical foot on the Wallabies’ throat with the need to give some of their under-employed players a go.

Covid complications in New Zealand and Western Australia have put the third test, in Perth a week on Saturday, in doubt, and, if it doesn’t go ahead as scheduled, there will be less need to freshen players up ahead of two tests against Argentina and two against South Africa, plus the northern tour that follows. There, will, though be an even greater need to provide some with game time if and when Bledisloe III goes ahead.

If, possibly after a delay while the All Blacks isolate, the test goes ahead, there will be valuable Rugby Championship points to chase and a point to prove at Optus Stadium, a place where the All Blacks themselves were beaten to the point of humiliation by the Wallabies in 2019 when they were on the receiving end of a 47-26 scoreline after playing half the game without Scott Barrett, who had been red-carded for a shoulder charge to the head of Hooper. As always, a victory is a non-negotiable for the All Blacks.

And, after an inconsistent 2020 in terms of on-field performances, patchy stuff in this year’s tests against Tonga and Fiji and a poor final quarter in the win over Australia in Bledisloe I, combinations, particularly among the loose forwards and inside backs, are beginning to look extremely promising.

But it seems inevitable that Foster and company will roll the dice, with Beauden Barrett in particular in need of game time in the No. 10 jersey and younger brother Jordie a good chance to start at fullback ahead of Damian McKenzie.

Beauden Barrett, the two-time World Player of the Year, hasn’t become an average one overnight but, after a combined 25 minutes-or-so over the last two tests, he clearly requires time to rediscover the attacking instincts that took him to those awards in 2016-17, and Foster may decide that Richie Mo’unga, outstanding over the past two weeks with his option-taking and execution, needs a rest.

After Bledisloe II, Barrett spoke about being reminded of his “early days” with the All Blacks regarding his appearances off the bench but the status quo isn’t sustainable and we won’t see the best of Barrett even off the bench if he doesn’t start soon.

The loose forwards are probably not as straightforward because Ioane, playing as well as he ever has in the No 6 jersey, thrives on game time. Likewise, Dalton Papalii, who has taken his chances well, and Ardie Savea who also shone last Saturday. In the absence of Sam Cane, they are a compelling trio.

But with tests against the Pumas and Boks, both of whom possess huge and muscular packs, approaching, the selectors may take a more horses-for-courses approach. That leaves the door open for not only Luke Jacobson, but also Ethan Blackadder, the latter not required for the Wallabies tests but a man who has the physique and workrate to drop a few heads.