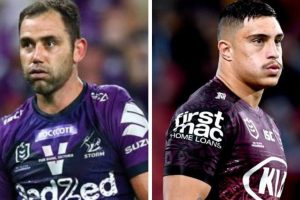 NRL players will be able to switch teams as late as August 1 in a rule change that opens the door to a late-season recruitment frenzy.

It was reported Tuesday, the NRL has scrapped the June 30 transfer deadline, pushing it back towards the finals series.

The switch would allow off-contract stars to move to new clubs as late as Round 20 this season.

NRL commentators said on Tuesday the new rule allows star players to find new clubs just 10 weeks before the grand final – giving high-flying clubs an upper-hand at convincing players to move to the teams heading for the finals.

“The NRL have pushed the signing deadline back from June 30 to August 1,” Rothfield said.

“What this is going to do is start a mad signing frenzy at the back end of the season. So clubs can keep their salary cap and don’t have to fill their roster until Round 20.

“We’ll be arguing about Cameron Smith until August. It’s a move by the RLPA. Souths, Warriors, Cowboys, Raiders are the only teams with 30-man rosters at this stage.

“A lot of clubs are holding back. I spoke to Frank Ponissi at the Storm. Say something happens to Jahrome Hughes, he’s got $200,000 left in his cap that he can actually sign a $600,000 halfback from a club that’s out of business because it’s only paying him for the last five rounds.”

NRL 360 host Paul Kent responded to the rule change by describing it as “So open to corruption”.

The change means teams can sign star players late by only needing to pay a fraction of their salaries. The later the signing, the higher the amount players can earn per game with a move to a new club.