The NRL is investigating why banned agent Isaac Moses was sitting with Joseph Suaalii’s entourage at Seiffert Oval on Saturday when he was not officially ticketed for COVID tracing purposes.

Suaalii, rugby league’s next big thing, scored two tries in an impressive debut before he came from the field late in the game with cramp on a warm Saturday afternoon in Queanbeyan. 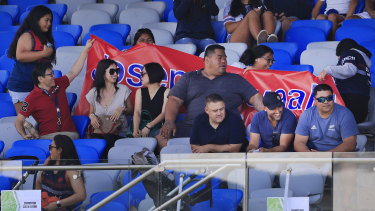 Spotted among the 40 family and friends who had made their way south to cheer on Suaalii was Moses, the formerly high-flying agent who lost an appeal against his deregistration by the NRL before Christmas.

Under the ban, Moses is not allowed to have anything to do with any player contracts.

Under strict COVID protocols, the Raiders needed to know every name and phone number of the 2000 fans who attended the trials involving Canberra, the Roosters and feeder club North Sydney on Saturday. Moses was not on that list.

Moses wore a black cap and sat in front of Suaalii’s father, Chris.

Canberra chief executive Don Furner told The Sun-Herald: “That’s surprising to hear [he was here] because we needed all the details of every single person here for contact tracing. I can tell you Isaac Moses was not on any list.”

Many in the game will be wondering if it was a good look to have a deregistered agent such as Moses in the stands with family members cheering on the game’s most-hyped teenager.

Moses was banned by the NRL in June for breaching his obligations as an agent in 2017 by “counselling, procuring and assisting one of his clients [former Parramatta captain Tim Mannah] to give evidence to the NRL that was false and intended to mislead an investigation by the NRL Integrity and Compliance Unit.”

He lost his appeal to that decision in January. 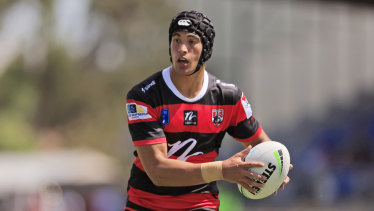 Joseph Suaalii had a brilliant senior debut for the Bears on Saturday.Credit:Getty

Moses, who had some of the biggest names in the game on his client list, did not respond to calls for comment when contacted by The Sun-Herald.

An NRL spokesman said on Saturday evening: “Mr Moses is not permitted to negotiate NRL playing contracts on behalf of any player. All clubs have been warned they face sanctions if they negotiate player deals with any unaccredited person. There is no restrictions on Mr Moses attending rugby league matches.”

There is no suggestion Moses discussed player contracts at the game.

Suaalii had South Sydney and Rugby Australia pushing hard for his services before the Roosters snuck under both their guards and signed him to a two-year deal. Moses has been associated with the family in the past, but had nothing to do with brokering Suaalii’s Roosters contract, which was negotiated by his father Chris Suaalii. Family members are allowed handle player contracts.

The Roosters are awaiting confirmation from the NRL whether they will be allowed to play Suaalii, still in year 12 at The King’s School, before he turns 18 on August 1.

While Chris Suaalii preferred not to comment about Joseph’s big afternoon, uncle Amani Suaalii, said of his nephew: “The sky is the limit for him. He is doing all right with the hype, he knows where he is going, we just let him do what he wants to do. I can’t wait [to see him play first grade]. He is ready.”

It remains to be seen if and when when Moses can officially return to the game as an agent.