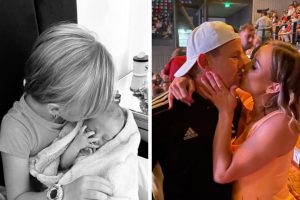 Carney and Bradley announced in December they were expecting their first child together before the former NRL playmaker’s joyous Christmas proposal.

Carney, 34, and Bradley, 27, shared a series of emotional photos of them spending precious time with their son.

The couple announced their son, born on Saturday, has been given the first name Lion.

He also shared a photo of Bradley breast-feeding Lion in an image that contained nudity.

“A lion’s most common traits are majesty, strength, courage, justice and might. A lion stands for both gentleness and power all rolled into one. A lion in your life enables you to bring positive changes in the lives of yourself, your family and your friends. We love you our little Lion. You will be one of the greats.”

Carney and Bradley, who failed to find love after appearing on a season of Married At First Sight, announced their first child would be a son during a fancy gender reveal video posted online.

It was during the reveal that Carney popped the question, catching his partner off guard.

Carney posted the moment on Instagram, writing: “We all have dreams and in 2020 all mine have come true. In 2021 my greatest gift is going to happen with a little Todd on the way and I’ll marry my best friend.”

After her ill-fated marriage with barista Billy Vincent on the hit Channel 9 show, Bradley was spotted out in public with Carney as early as March, 2019.

Carney shot into the NRL spotlight as a 17-year-old, however, his career was derailed by a series of off-field incidents that saw him sacked from Canberra and released by the Sydney Roosters before the infamous bubbler incident at Cronulla saw him ultimately exiled from the NRL.

Susie Bradley and Todd Carney as seen in Instagram posts..Source:Instagram

Carney, who now lives on Queensland’s Gold Coast where he works as a concreter, says he’s found peace in his life and wants athletes across the country to learn from his mistakes.

Bradley is also mum to a five-year-old daughter named Baby from a previous relationship.