‘Now it really starts to smell’: ‘Rabs’ Warren concerned by rise in diving in NRL

Ray Warren has called rugby league for 55 years but for the first time the veteran caller has been disturbed by the number of players staying down to win penalties.

Warren said he would never call out acts of gamesmanship during the live TV broadcasts because players could in fact be hurt, but the veteran commentator has been dismayed by some of the apparent play acting that has been seen in NRL games in recent weeks. 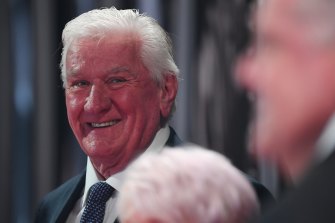 Ray Warren has been disturbed by the ‘gamesmanship’ of some players in recent weeks.Credit:Grant Trouville/NRL Photos

As Warren prepares to call his 97th Origin from the Nine’s Sydney studios – about 1700km away from the live action in Townsville – the voice of rugby league told the Herald: “I’m concerned some players are staying down to benefit from the high shot crackdown, when in fact the crackdown is all about protecting the player’s welfare.

“It happens all the time we make changes and there is a domino effect, so the game once again gets a bollocking.

“People like Peter [V’Landys], Andrew Abdo and Graham Annesley are good people and they have the best interests of the game at heart.

“Besides, I’m a commentator doing the best job he can, I’m not a doctor, I’m not medically qualified, and if I’m 100 yards away or 100 miles away, how can I be sure if a bloke is acting?

“What is embarrassing is when a player gets the penalty for his side, then is first receiver from the ensuing free-kick and runs 50m. Now it really starts to smell.

“I covered my first game in 1966. They didn’t go down then for any other reason other than they were hurt. In fact, it was a badge of honour not to go down.”

The number of incidents of players staying down since Magic Round has angered fans and a growing number of players. There were several incidents during the Wests Tigers and Penrith game that led to penalties but did not lead to any charges with the match review committee the next day.

South Sydney skipper Adam Reynolds was one of the first to call it out when he told the Herald a few weeks ago ‘people are diving and milking it for what it is, and that’s more concerning than the accidents to the head and neck’ while several Blues have made it clear they will avoid staying down in Origin I.

Gould and Paul Vautin will be missing during the Origin I coverage as Nine, publishers of this masthead, continue a commentary rotation policy.

“We have tried over time to even up the number of Queenslanders in the team of commentators and we have done that – I love working with all of them,” Warren said.

“‘Fatty’ brings humour and great knowledge. ‘Gus’ [Gould] can polarise, but that is brilliant in itself, while he is also a great entertainer, even when the scoreboard reads 40-0.

“Peter [Sterling], Fatty and I started as the original team on day one from memory back in 1992, they all have a massive knowledge of the game, but are still respectful to old blokes like me who is simply trying to keep up with them.”