‘No trust’: NRL, NRLW again at loggerheads over Origin miscommunication

The stars of the NRLW have been left furious after a poorly worded statement from the NRL had the women of the game believing they had finally secured a three-game Origin series next year.

Last week, the NRL issued a statement about the postponement of this year’s NRLW season, which outlined the full schedule of women’s rugby league to be played in 2022.

The statement outlined a women’s Origin series for 2022 which led the NRLW playing group to believe they had finally secured three matches, something that had been highly sought after in recent years.

At the moment, the women play just one State of Origin game.

“Next year there will be two NRLW competitions, a World Cup, an Origin series and state competitions. That’s never happened before,” chief executive Andrew Abdo said.

“This presents an opportunity to build the profile of the women’s game next year and we are looking forward to making the most of that opportunity.” 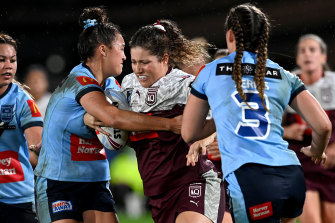 But after the players’ union asked about the announcement, they were told it was wrong to assume the term “series” meant more than one game.

When seeking clarification, the NRL told the Herald the governing body had always used the term “series” to refer to the one-game tie.

“I was with the first broadcast Origin game. It was always called a game or match. It was never once referred to as a series. Not once,” she said.

“It’s just a feels like another cop-out, another ‘we don’t really care about the girls’ game’.”

The NRL has been out of favour with the women’s players ever since announcing the postponement of the 2021 NRLW season.

The governing body assured the group they had exhausted “every avenue” in attempting to play the women’s season, but was later found to have never formally enquired about the possibility of an NRLW bubble with the Queensland government.

As a result, the NRLW playing group boycotted various meetings with the NRL in response as the game looked to come to a resolution.

Southwell said all the players believed, upon seeing the statement, the NRL had announced three games to make up for their lost footy this year.

“When we saw that release everyone thought ‘oh my goodness, they’ve announced three games’,” she said.

“This has honestly done me. It just doesn’t surprise me. The relationship [between the NRL and NRLW] … it’s completely gone. There’s no trust, the girls have nothing left. ”

RLPA president Clint Newton said he was hopeful of repairing the relationship between the female players and the NRL in the coming months.

“I am optimistic about it because what’s the alternative?” he said. “I think, yes, there have been some challenges. But there’s now a good opportunity now to say let’s reset and let’s effectively start again. We need to look forward.”