‘No idea it was wrong’: Addo-Carr escapes conviction over firearms offence 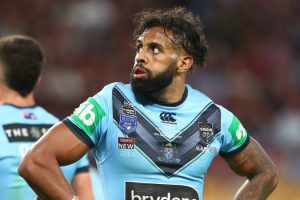 Josh Addo-Carr has spoken of his relief after avoiding a conviction for a firearms offence during a camping trip on Latrell Mitchell’s North Coast property last year, declaring: “I had no idea I was doing anything wrong.”

Addo-Carr was sentenced to a 12-month conditional release order after pleading guilty to one count of using an unauthorised firearm and one count of failing to comply with ministerial orders relating to COVID-19 movement at Taree Local Court on Friday. It was the same penalty handed to Michell over his role in the incident, which took place at Caffreys Flat last April. 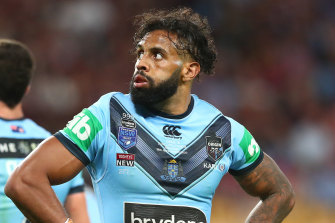 Josh Addo-Carr in action for the Blues.Credit:Getty

Magistrate Allison Hawkins accepted the Storm star was unaware he had committed an offence, as evidenced by the fact footage of him firing a rifle was posted on social media.

The NSW winger declined to comment to reporters outside court but told the Herald and The Age he had learnt from the experience.

“I had no idea I was doing anything wrong,” Addo-Carr said. “I understand now that it’s against the law.

“I never intended to break the law, I didn’t know it was against the law.

“If I’d known that, I wouldn’t have done it.

“I’m happy it’s over, I’m glad it’s all finalised. I’ve got a great legal team behind me and good people supporting me along the way.”

The sentencing hearing was originally scheduled for October, but the matter was postponed because Addo-Carr was in the NRL’s coronavirus bubble. The drama didn’t affect his football; the 25-year-old won a premiership with Melbourne and performed strongly during the State of Origin series.

“It’s been pretty tough, but I can now move on with my life,” he said.

Addo-Carr unsuccessfully contested the NRL’s $50,000 fine – 60 per cent of which was suspended – for breaching social-distancing protocols. His lawyer, Elias Tabchouri, said Friday’s court outcome was a reasonable outcome.

“The determination made by her honour was appropriate in relation to the offences as they were put before the court, noting of course Josh’s exemplary character and extensive work in the community,” Tabchouri said.

“Josh is happy to have the matter resolved prior to the commencement of the NRL season. He’s looking forward to putting his best foot forward for Melbourne this year.”

Addo-Carr has signed a four-year deal with Canterbury from next year, but will first focus on defending the Storm’s premiership when the NRL season commences next week.