Crichton and Burgess went at each for most of the second half of last Thursday's derby clash, but a one-match ban for hair pulling means the fiery Englishman will have to sit out round two at the Sydney Cricket Ground. 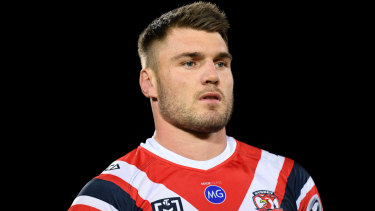 Angus Crichton would have liked to have faced off with Sam Burgess again.Credit:AAP

"It would have been fun to play against him again," Crichton said. "There's a lot of passion there and we were both out to get the win for our teams the other night. Had he been playing on the weekend it would have been another good clash and a lot of fun."

Burgess had to bite his tongue to stop himself criticising the match review committee for rubbing him out of a finals gameat Monday's captain's call.

When the two were teammates, Burgess challenged Crichton to continue giving his all to Souths after announcing midway through the 2017 season he had signed a deal to jump ship to the Roosters. The Eastern suburbs side claimed they signed Crichton for around $700,000-a-season while Souths were adamant that figure was closer to $1 million.

Crichton was confident the premiers could exact revenge for Thursday's 16-10 defeat to their bitter rivals.

"You have to look at the team we have and the style of footy we play," said Crichton, when asked why the Chooks could get one over his former teammates. We're blessed with great talent all over the park and everyone knows their role and their job.

"Luke Keary is a fantastic player and I think he adds a heap to our team, as does Brett Morris and Mitch Aubusson. Keary has a lot of speed and energy and smarts and it's great to have him back in our side.

"For me the Roosters are home. There's no doubt about that. I respect the Rabbitohs as a club and what they did for my career, but I've been a Roosters fans since I was a kid, and while I've said it before I'll say it again – I'm a Rooster now."