North Melbourne have changed tack on their recruiting policy, and are planning to spend at least the next two post-seasons replenishing at the draft and taking a heavily youth-focused approach.

In a shift from a period of pursuing "big fish" who were out of contract from other clubs – notably Dustin Martin and Josh Kelly – without success, the Kangaroos have mapped out a draft-first plan that means there is little chance they will be trading early choices this year or in 2021. 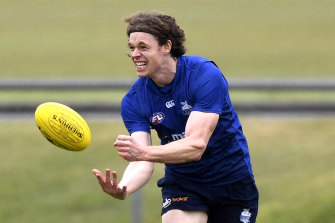 North are not planning to trade out Ben Brown, but wouldn’t turn down the right deal.Credit:Getty Images

Sources familiar with North's shift in thinking said that while the club wasn't planning to trade out struggling key forward Ben Brown, it would be prepared to look at moving Brown if the right deal was on the table. It is unclear what Brown, 27, who suffered a knee injury in the first quarter of Wednesday night’s clash with Geelong after being dropped in round nine, might attract in terms of draft return.

North's move to a youth and draft-based regeneration of the playing list is a recognition that the club's attempts at "topping up" with non-star players including the talented but unreliable Jared Polec, fellow former Port Adelaide player Jasper Pittard, ex-Sun Aaron Hall and former Demon Dom Tyson, had not improved performances.

The view internally is that the Roos' group of players aged 26 and over is not capable of taking them to contention and that the only way forward is invest more heavily in the national draft, a process that will take two or three years.

The team named to play Geelong was the second oldest of those that were playing up to Thursday night.

More broadly, there is an argument within the AFL industry that smaller clubs such as North, the Dogs, Port Adelaide and Melbourne must place a greater emphasis on drafting compared to teams with more resources who are better placed to land sought-after recruits from other clubs and expensive free agents, although on-field results also dictate the appeal of clubs.

The commitment to the draft and youth has been overseen by North's head of football Brady Rawlings, a former Kangaroo poached from West Coast (where he was list manager), and his experienced new head of playing personnel Scott Clayton and new list manager Glenn Luff.

The list regeneration strategy has been endorsed by the club's board, headed by chairman Ben Buckley and with the full support of influential director and club great Glenn Archer.

North will enter this year's national draft with what are expected to be two top-10 picks, since the Roos have their own choice plus Melbourne's.

As chairman, Buckley recently responded to supporter angst following a run of losses by sending a message to members calling for patience.

In explaining that changes the club had made would not influence the team overnight, Buckley said Rawlings and coach Rhyce Shaw needed time to make their mark. Buckley indicated that they wanted to bring elite youth into the club.