Newcastle, Perth and Melbourne have emerged as the destinations vying to host the return of the club-based NRL Nines competition.

The abbreviated version of the game is poised to return to the calendar from next year after the concept received in-principle support at the latest meeting of club chief executives during Magic Round. 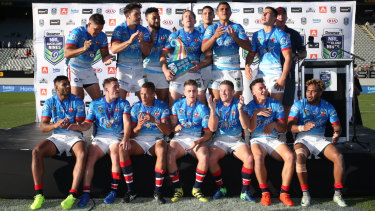 The Roosters won the Nines in 2017, the last time the competition was held.Credit:NRL Photos

The tournament will go ahead subject to sufficient government investment, which appears likely given competition from three states to play host.

NSW is attempting to bring the event to McDonald Jones Stadium, the home ground of the Newcastle Knights. Perth is proposing their new Optus Stadium, the venue for the A-League decider on Sunday and the second game of the upcoming State of Origin series. Melbourne is also in the mix with AAMI Park shaping as the most likely location if the game shifts north.

The successful bidder will have the first official rugby league content of the 2020 season, with the two-day event scheduled for mid-February.

The Nines were held in Auckland for four years from 2014, although the fixture was taken off the schedule due to player workload concerns revolving around the last Rugby League World Cup. When the concept wasn’t immediately reintroduced afterwards, it appeared to be the demise of the Nines as a club-based competition. However, broadcasters expressed an interest in its comeback and the clubs are amenable if it stacks up financially, despite the risk of injuries to star players.

The initial tournaments were staged by Duco Events, but the NRL will take responsibility for their running in-house from now on. The governing body is hopeful the prizemoney pool will be large enough to incentivise the clubs to release their best players for the matches.

The success of the inaugural Magic Round in Brisbane has convinced league powerbrokers there is an appetite for innovative content. The four-day festival of football injected an estimated $20 million into Queensland’s tourism economy after more than 134,000 fans – many of them from interstate – attended.

Queensland was ruled out as a Nines option after already hosting Magic Round, while Bankwest Stadium was also disregarded because it will be the home of the Rugby League World Cup 9s on October 18-19 this year.

The development means that, after three years without Nines football, fans will have the chance to witness two Nines tournaments in the space of four months.

The Roosters, the reigning NRL premiers, also hold the Nines title after winning it when it was last played in 2017.