West Coast have another injury concern after key forward Josh Kennedy hurt his ankle against North Melbourne on Thursday night.

He went straight down into the rooms for assessment, with the Eagles reporting the veteran's ankle had swollen during the break.

Kennedy has battled ankle problems throughout his career but coach Adam Simpson told Fox Footy the injury to the 33-year-old was a new issue. 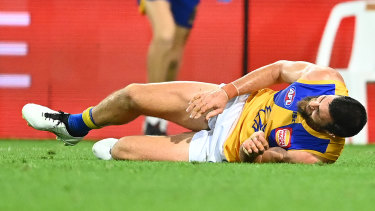 Eagles spearhead Josh Kennedy goes down against the Kangaroos.Credit:Getty Images

"It's something new … he can't feel it," Simpson said.

It is a fresh blow for the Eagles who are already without key defender Jeremy McGovern and premiership midfielder Jack Redden for the first final, while Luke Shuey and Elliot Yeo remain in doubt.

Kennedy will have two weeks to recover with the pre-finals bye in place and he had the left ankle wrapped in ice shortly after the long break.