The signing of Latrell Mitchell is set to send ripple effects through the contracts of other players, with Rabbitohs football boss Shane Richardson confirming there is still money in the cap to get Jai Arrow at Redfern Oval for 2020.

But they will need to get on their hands and knees to make the deal happen, with Titans head of football Mal Meninga declaring the deal would only go through if the likes of Tom Burgess or Cameron Murray for a player swap. 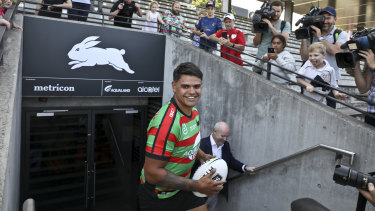 Before he landed on the Rabbitohs, Latrell was almost lured into the Tigers who dangled a $4m offer over four years in front him as far back as November. Despite deals and discussions with North Queensland, Titans and the Roosters, Mitchell eventually settled on a one-year contract with Souths on $600,000 on top of the $116,000 the Roosters have paid since November.

When asked about how adding Mitchell to the pack would push players such as Doueihi out from the spotlight, coach Wayne Bennett said it was a "hard decision".

"Some of the boys here have played some great football for us but the end result is we couldn't walk past the opportunity to take Latrell," Bennett said. "This club is about success, we want to have the best team we possibly can here and we believe he is going to add to what we already have."

Richardson said that after Latrell's signing, his priority above all else would be getting Arrow to Sydney and that he hadn't "given up hope" on doing so.

Last Monday, Souths announced the signing of Arrow on a four-year contract from the 2021 season, but desperately need the Titans star this year to fill the Burgess-sized whole in the side's forward pack. 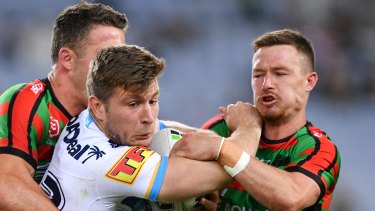 Last Monday, Souths announced the signing of Arrow on a four-year contract from the 2021 season, but desperately need the Titans star this year to fill the Burgess-sized whole in the side’s forward pack. Credit:NRL Photos

"Jai Arrow is a major thing for us," he said. "A lot of people just misunderstood to sign Latrell would have an effect on Arrow, it doesn't have any effect at all, a lot of clubs though that, like blood in the water they think the sharks are circling but that wasn't the case at all."

Titans chief executive Dennis Watt said there is simply "no incentive" for the Titans to release their "best player" in Arrow to an opposing side and would need "a like for like player" to secure the deal.

Souths offered up a winger to the club last week which was knocked back by the Titans.

"At this stage, we are obviously keen to keep Jai," Watt said. "They did offer us a player last week, but he was a winger so…at this stage there is nothing there to interest us."

Watt said that Souths have not yet come to the table with a decent offer, but was eager to "wait and see what the club would come up with over the coming weeks".