Converted tries from Aaron Smith, Grace and Coote – who scored a total of 26 points for his side – put Saints into a commanding 20-0 lead at half-time.

A debut try for Owen Trout got the Giants on the board seven minutes into the second half, but further scores from Welsh winger Grace and Scotland full-back Coote helped the reigning champions move top of the table on points difference. It was a complete mismatch against a team who have lost all four matches since gaining a shock 12-10 win over the champions at the Totally Wicked Stadium in March.

The Giants had 10 players missing for a variety of reasons and will be hoping to get new signing Chris McQueen in action as soon as possible after he watched on from the sidelines after flying in from Australia on the morning of the match.

Coach Simon Woolford, who announced in the build-up that he expects to leave the club at the end of the season, also handed a debut to hooker Reiss Butterworth and a first outing of the season to 19-year-old winger Dominic Young, who will join Canberra Raiders on a three-year deal in 2021 and was one of the few Huddersfield players to catch the eye.

At the other end of the experience scale, Saints’ England veteran James Graham made his 200th Super League appearance but the champions also had a sprinkling of youth with the versatile Jack Welsby taking the place of injured half-back Theo Fages and Josh Simm making his second appearance in place of England centre Mark Percival. 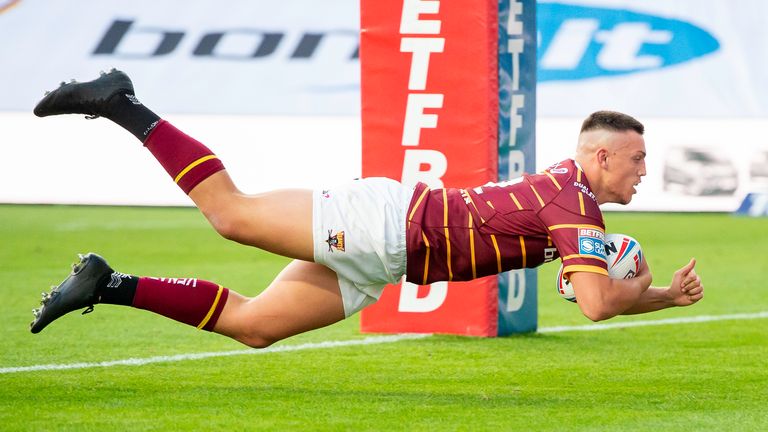 Saints opened the scoring in fortuitous fashion, hooker Smith’s grubber kicking rebounding off a defender into the grateful arms of Coote for the easiest try he will score.

England prop Alex Walmsley caused all sorts of problems for the Giants defence and it was from his popped pass out of the tackle that Smith scored the champions’ second try on 13 minutes and Coote’s second goal made it 12-0.

Huddersfield went close to pulling a try back when second rower Sam Hewitt dropped on a loose ball over the Saints try-line but video referee Marcus Griffiths ruled a knock-on in the build-up and that was the sum total of their worthwhile attacking efforts in the first half.

A careless pass gifted a long-range try to Grace on 24 minutes but St Helens missed a host of other chances and a penalty goal from Coote was their only other score up to half-time, when they led 20-0. Huddersfield showed more resolve in defence at the start of the second half and pulled a try back when former Leeds Rhinos forward Trout stole the ball one-on-one from Saints prop Louie McCarthy-Scarsbrook to go in from 30 metres.

Oliver Russell added the conversion but McCarthy-Scarsbrook made amends for his error by charging over for Saints’ fourth try and restoring their 20-point advantage.