Home » Lynch to miss Pies hitout, but Prestia could play round one 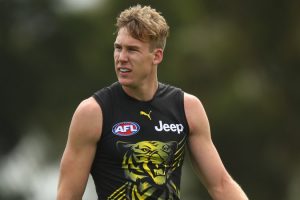 Tom Lynch will join Dion Prestia on the sidelines on Friday night, missing Richmond’s hitout against Collingwood with a toe complaint.

Prestia, who has been troubled by soft-tissue injuries in the past, is nursing a hamstring strain. 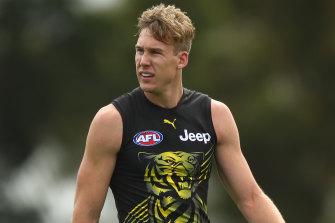 But development coach Sam Lonergan said Lynch and Prestia were both on track for round one, and insisted the Tigers were being “ultra-conservative” with the star pair.

“It’s just a conservative approach leading into this time of year,” Lonergan said on Thursday. “Dion’s tracking really well to be right for round one.”

Lynch and Prestia join defender Bachar Houli in the medical room, who will not feature in the season-opener as he recovers from a calf tear sustained in last year’s grand final.

It opens the door for Richmond’s youth to audition, with 2018 first-round pick Riley Collier-Dawkins, young ruck Callum Coleman-Jones and Will Martyn — who impressed against Melbourne last week — all set to play against the Pies.

“From a development point of view, it’s fantastic to see them and their approach,” said Lonergan. “Their attention to detail is elite, because they know they’re up against elite players for the same spots.”

Maurice Rioli jnr, who will be subject to much intrigue in his first year, has also impressed Lonergan throughout the pre-season.

“His game last week [in the reserves] was fantastic,” Lonergan said.

“He was bash and crash, his appetite for the contest was exceptional for a young man and it’s exciting. It’s exciting to see a young player in our footy club with that amount of hunger and aggressive approach to the contest.”

With Richmond set be hunted again this year in the premiership stakes, Lonergan said the Tigers would back in their system.

“At this stage, we’re very familiar with how we play. We’ll continue to adapt and adjust and look at things as they arise, but at this stage we’re pretty confident in the program we run.”